My experience with Metro Comic Con in 2010 was so overwhelmingly positive that I absolutely had to take part in MCC again in 2011.  I had far more material this time for con-goers to enjoy so I was pretty excited!
Once again, like last year, I was the first among the artists in the Indie GO! Valley to arrive.  This was the area for Independent comic creators such as myself to set up shop for the convention.  The indie tables were located this year in the venue's periphery, albeit right next to the entrance.  I remembered bloggers describing a similar convention setup in comic conventions in the US.  Still, I wished we were placed alongside the other comic artists and Artist Alley (as we were in 2010) who were positioned at the opposite end of the hall.  Nevertheless, our location had the promise of good traffic. 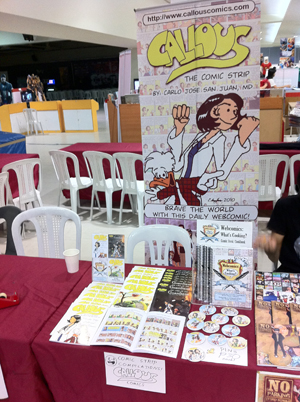 I opted not to face the entrance which I felt would have been far too busy to describe light-reading, happy happy chill family-friendly fare like Callous Comics.  Especially since, like last year, I had to describe the series to anyone who'd listen as the title did not picture the series at all (unlike, say, Zombies in Manila which pretty much says it all in glorious fashion). 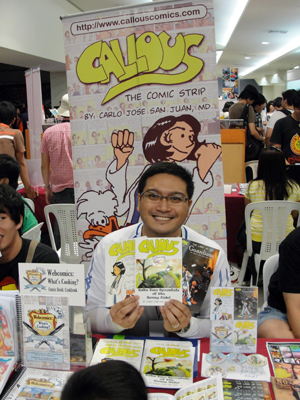 But I was selling more than just Callous Comics.  I was also selling Webcomics: What's Cooking?, a charity project by several webcomic creators, including myself.  It drew a lot of good attention and I'm thankful for those who purchased copies (although they did so after the comic con).  The book required a lot of explaining which I was happy to provide. 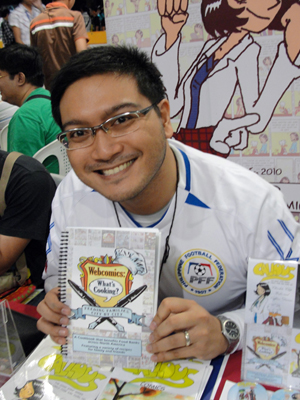 It was expected that hard core comic-loving con-goers wouldn't show up until the afternoon, as it was also Free Comic Book Day!  Furthermore, David Lloyd's signing wouldn't be until the afternoon as well.  I couldn't leave my table but my wife was gracious enough to stand in line for his autograph.  I got a copy of V for Vendetta signed and he included a sketch of a swimming duck as well! 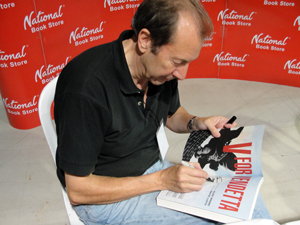 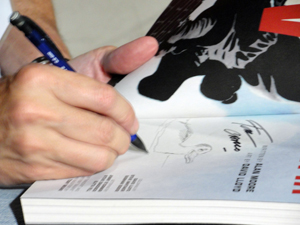 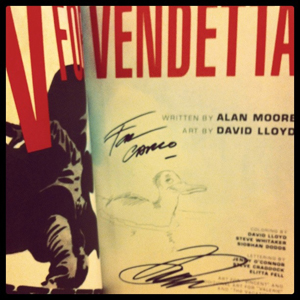 Indie comic sales peaked in the afternoon of day 1 with scores of comic lovers flocking to our tables.  Day 2 started out pretty quiet with the Pacquiao-Mosley fight going on.  We comic creators took the time to check each other's stuff out and had some great conversations.  And, as it seems is tradition for MCC, the second day brought out cosplayers in full force!  It was incredibly entertaining to see the fantastic costumes these people produce!  Some were gracious enough to pose with my comics, the pics of which you can find HERE. 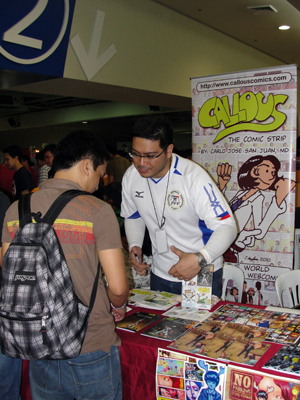 In the spirit of cosplaying I came in wearing scrubs again, a reference to the occupation of the main protagonist in Callous Comics.  It drew more inquiries than what I wore on the first day, the 2007 replica kit shirt of the Philippine National Football Team.  I had hoped to find someone who would talk about the "Azkals" with  me, but alas it never happened. Oh well... :)

Overall, it can be seen that the 2011 Metro Comic Con was the biggest ever as it moves to further encompass more of the wide world of pop culture!  It was a good time and I'd love to be a part of it next year!
Next post: Let's Celebrate...
Previous post: Coming Up: 2011...