Early 2010 while my fellow webcomic creators were having a grand time in comic cons around the world, I felt a twinge of jealousy.  At the time, however, I felt Callous was not ready for a comic con debut especially in my home country where it was practically non-existent in the local narrative illustration scene.
When Callous began its daily run in August 2009 after thirteen years of on and off publishing in various print and online carriers, I did the cookie-cutter motions of online comic promotion left behind by various creators and bloggers who blazed and/or documented these trails before me.  However, most of these creators were based in other countries so while Callous gained a decent following, its local footprint was still dismal.
A simple web search led me to the DeviantArt page of the Metro Comic Con.  What caught my eye was their "Indie GO! Valley", a section of their floor completely dedicated to independent artists.  The best part?  No fees for the table (you do pay the cheap two-day entrance fee) and you aren't required to share your profits with the event organizers. The catch is these essentially free tables are limited and are on a first-come, first-serve basis.  Everything could be done online which was remarkably convenient for me.  Once I got the word that I got a table, I began my preparations.
As if on cue, the #webcomicschat trend on Twitter, moderated by Super Siblings' Patrick Scullin, were discussing comic con tips and tricks a few days later.  I got tons of great advice from my fellow webcomic creators.
Being a webcomic, I had the cost disadvantage of having a vast majority of my comic strips in color.  I couldn't go the route of having pages of my printed work be reproduced cheaply through photocopiers.  So I went to printers who, for 28 pages plus cover in full color for 100 copies, quoted a high price I felt no one would pay for.  I then decided to print the darn thing myself, which made things a whole lot cheaper.
So I got to print around 80 copies of my comic strip compilation mini-comic, had some cute button pins, got business cards, and a nice printed 6 x 2 foot tarpaulin for my backdrop as well. 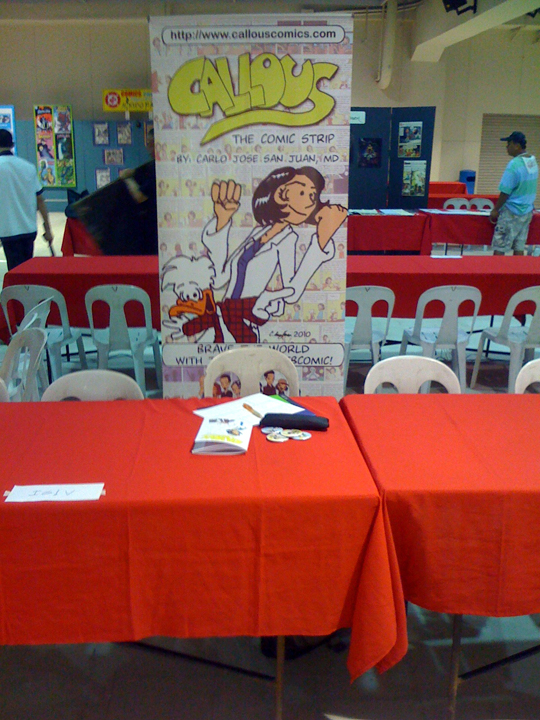 I arrived early on the first day and was instructed to pick my spot in the Indie GO! Valley.  I set up my space pretty quickly and chilled while waiting for the other indie artists to arrive.  When they did, things got off fabulously on the right foot.  Everyone was nice and there were a few more first-timers as well, which really helped calm my newbie nerves.  Yes, I admit it, I was nervous.  To my left, Ambush comics set up their wares and I met Andrew Villar and Ado Aparentado.  I was eventually introduced to Hazel Manzano of the brilliant Callwork comics, who sat a couple of tables away.  To my right, I met Norby Ela III, the artist behind Yo, Bo! who had a dynamic set up which grew as the weekend went by.
So the gates opened and boy, were there a lot of people crowding the indie comics tables!  But I had to drop my price because no one was approaching my table, as the original price drew scowls.  I made it a point to talk to people interested in my comics, telling each one about it as I was sure no one had heard of it (except for a couple of people, who claim to have encountered it online).  But man, those precious copies I slaved over to print flew off my table faster than I thought it would. 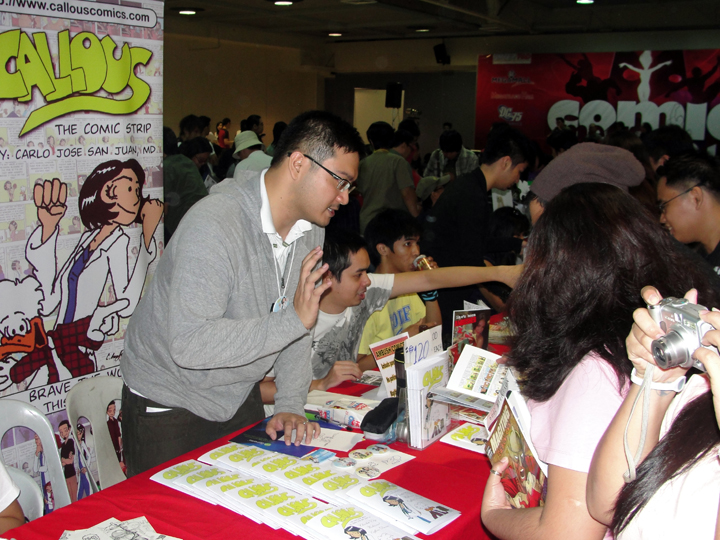 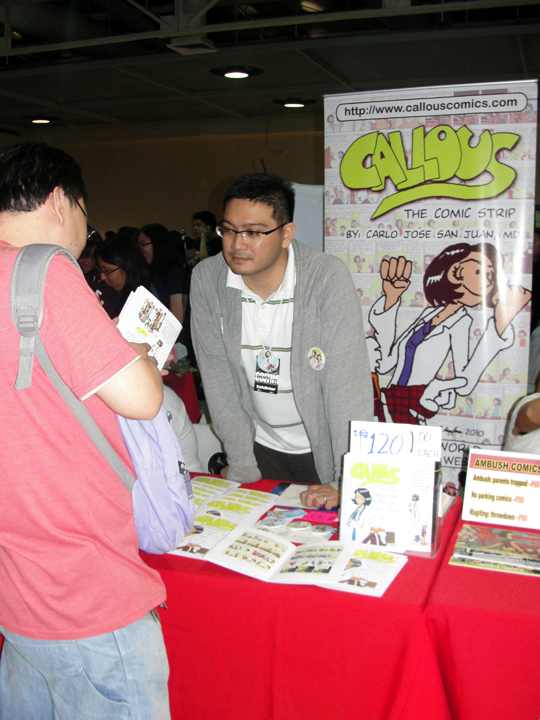 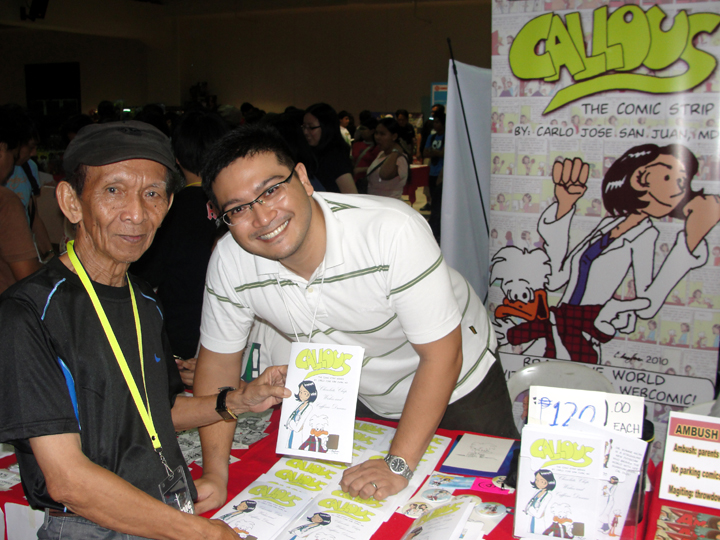 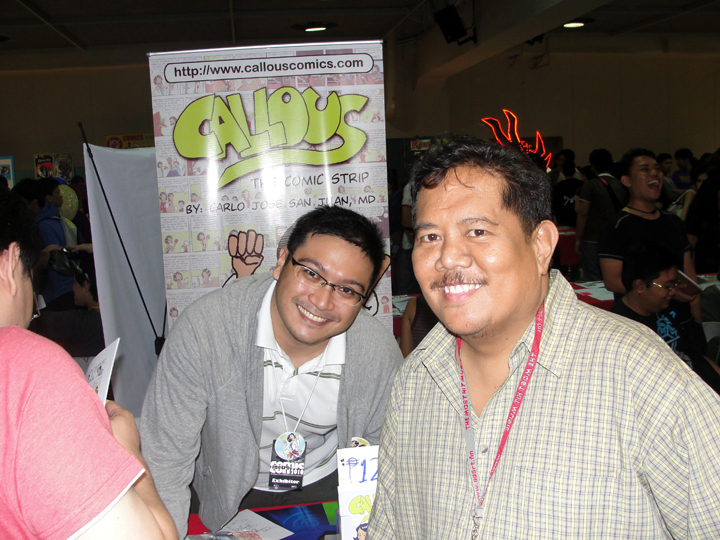 With Gerry Alanguilan
By late afternoon I toned down my sales efforts because my supply for both days of the Metro Comic Con was down to seven copies.  Once those were showing signs of being wiped out, I called it a day and went home early to print more copies. 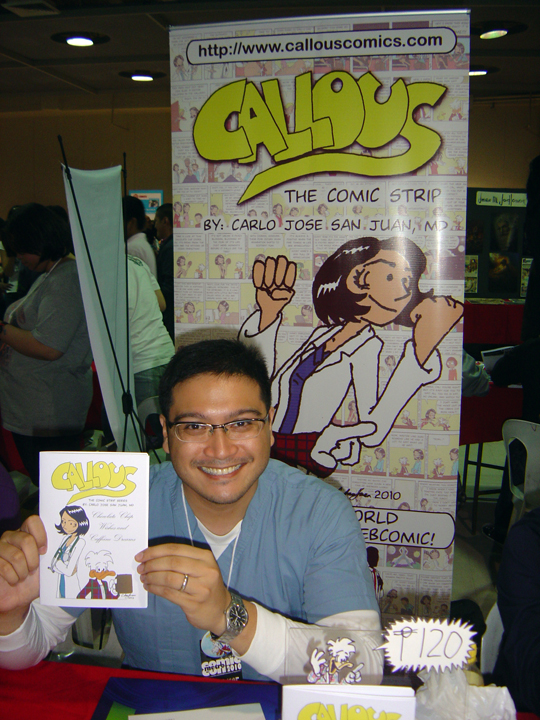 The second day of Metro Comic Con began with cosplay being the big event.  So to keep in the spirit of things I wore my scrubs to the con!  And yeah, I hardly slept the previous night because I was making fresh copies of "Callous - Chocolate Chip Wishes and Caffeine Dreams"! 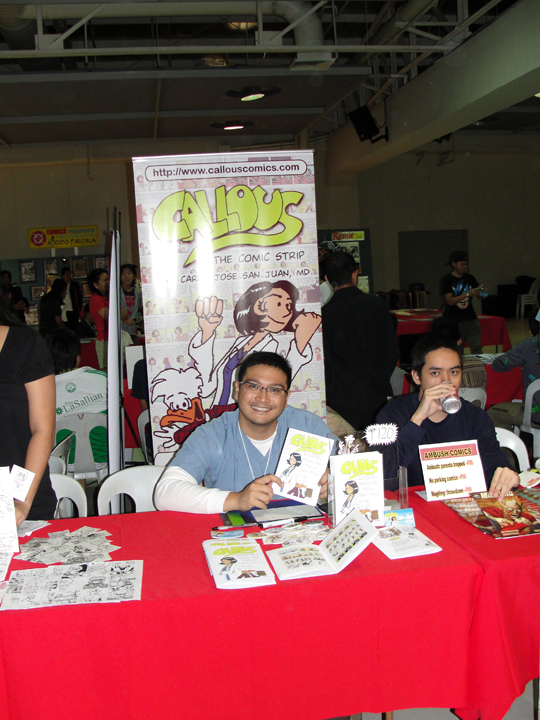 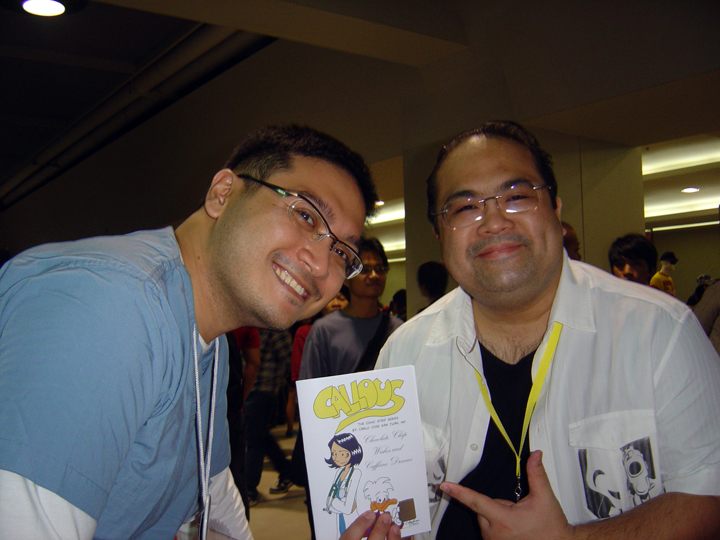 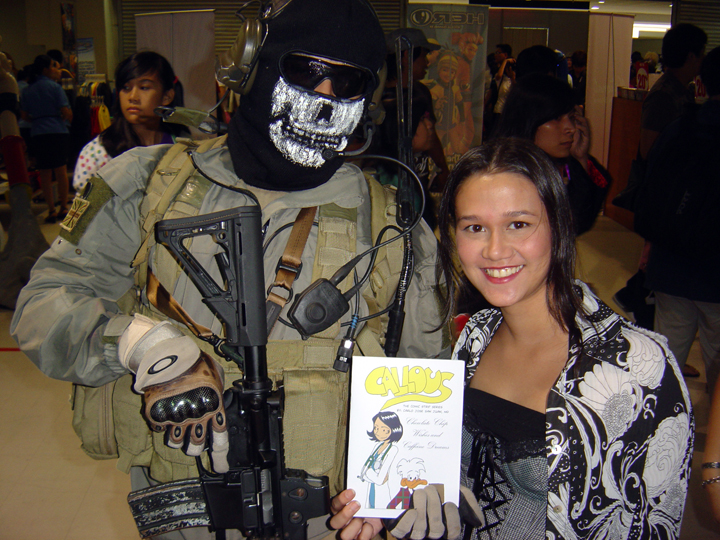 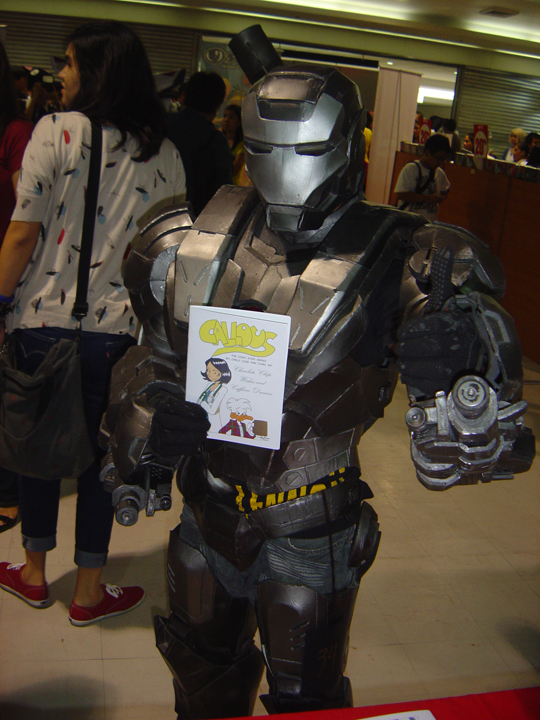 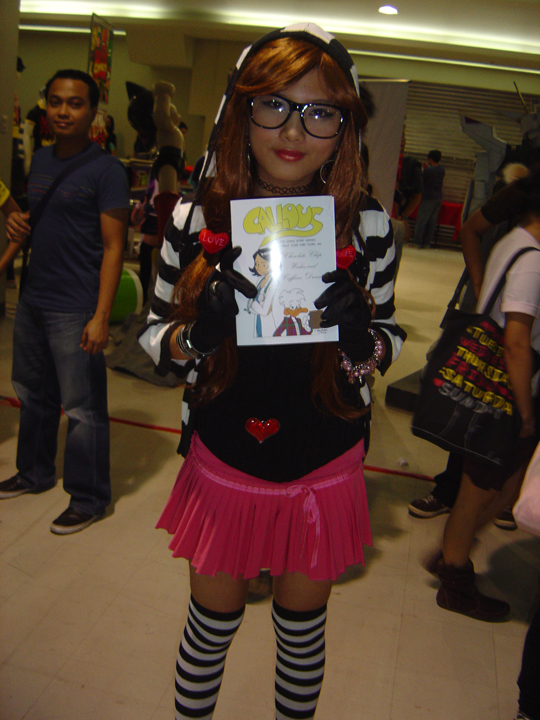 The cosplayers came out in full force and I was introduced to a completely new yet delightful culture! 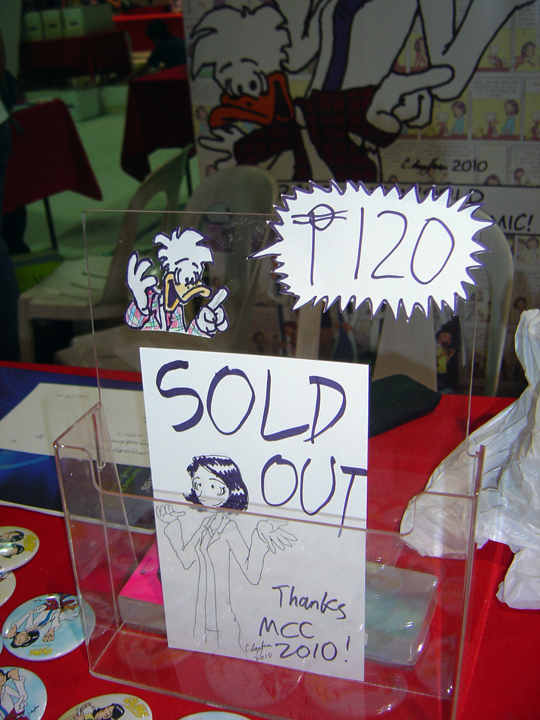 Eventually I had sold all of my copies (except one, which I saved for myself)
Thanks Metro Comic Con 2010! 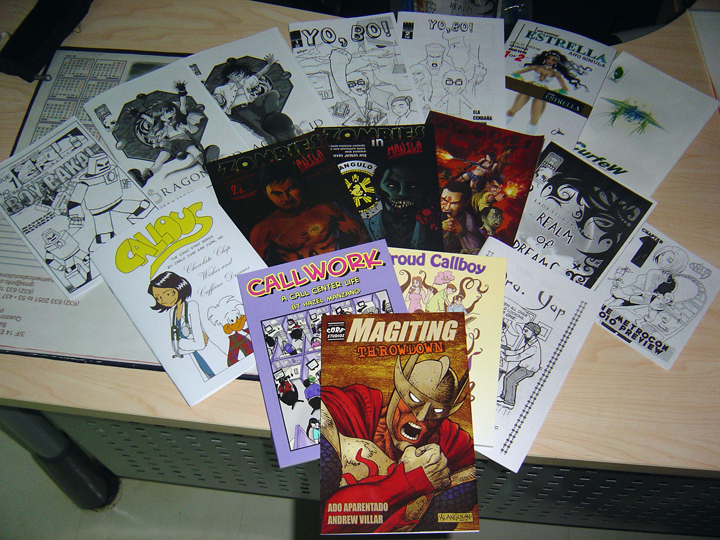 Toward the end of the day I was able to leave my table and roam around, buying some indie comics myself!  I ended up with a fantastic array of comics!  The experience was dreadfully tiring but I can't wait for my next chance to take part in a comic con!

But my self-publishing didn't end there.  I made one last print run for those who had copies reserved (which I had to sell).  I made some extra copies to sell (why not?) and here are the proud owners of the last self-published copies of "Callous - Chocolate Chip Wishes and Caffeine Dreams". 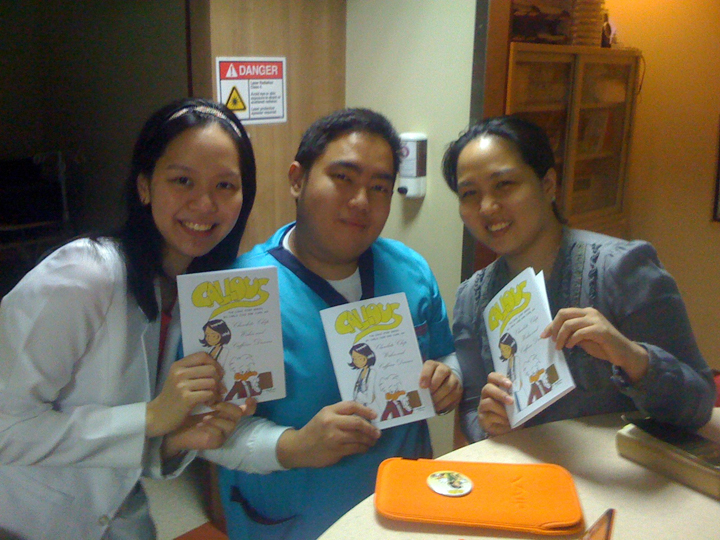 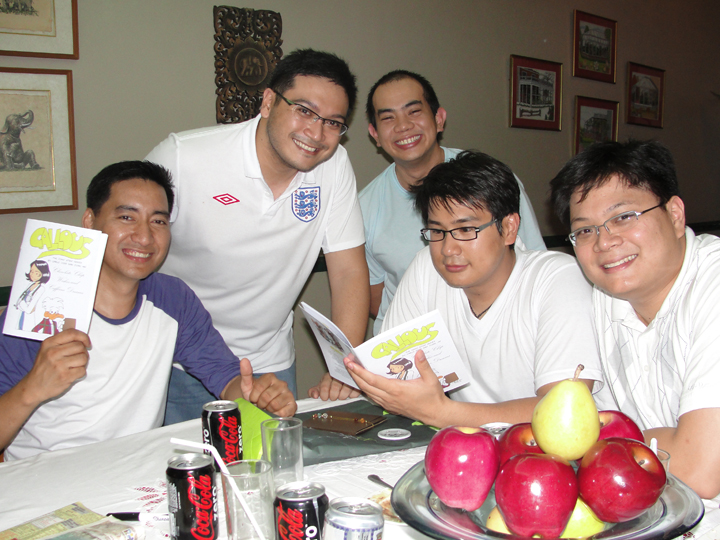 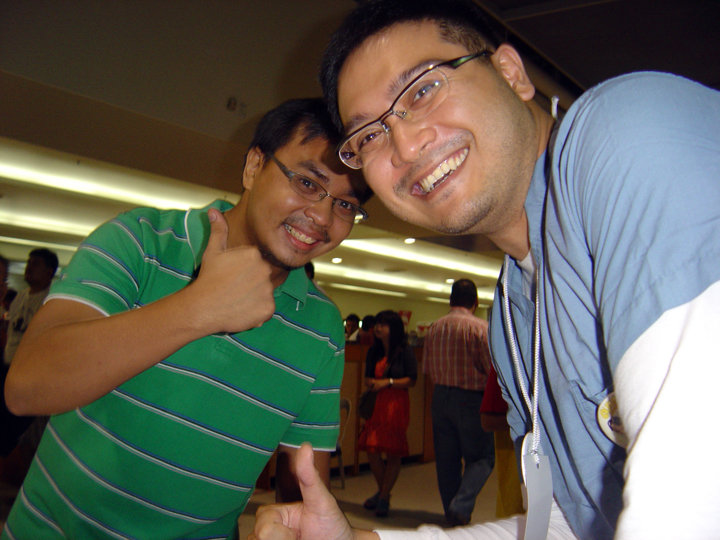 Lastly, thanks to Ernest Leo Hernandez and the rest of the Metro Comic Con crew for this wonderful opportunity!  Until next year!
Next post: Coco Komodo and a...
Previous post: Callous - Three...