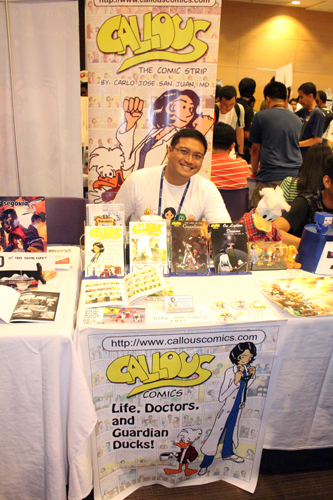 "Oh my! A BEL BEAN figurine!"
That was the delightful exclamation of a regular reader as he spotted the figurines made by Rommel Estanislao displayed on my table.  Another fan adored the duckling plushie I recently purchased from a bargain bin and instantly knew it was supposed to be Ling Duck!  It was a wonderful feeling to see secondary characters like Bel and Master Ling get as much, if not more, love than Rianne and Cal Duck.
And those were but a few moments that made a truly memorable Summer Komikon 2012, quite possibly my best comic con to date!
Let me, however, start from the beginning.
My preparation for Summer Komikon 2012 was turbulent to say the least.  The hunt for an affordable and quality printing press for the On Lighter Dreams book was an adventure in itself.  My favored press gave me a quotation that I just couldn't afford so I hunted around for an alternative.
Then, my wife and I were blessed with a second child.  As wonderful as it is to have a new baby daughter, she took what little spare time I had for Callous Comics so I had to go on break from the series and that included my work on the new book.
Furthermore, the precious free spots of the independent comics area of Summer Komikon 2012 filled up within hours of their initial availability.  I wasn't sure if I was one of those who landed a table and all the paid booths were taken.
Fortunately, I was one of the few who submitted the application in time for the free tablespace.  Then, I found a great printing press that far surpassed the quality of my previous one with a decent quote.  Suddenly, it seemed like things were going full speed ahead for the con and I was grateful! 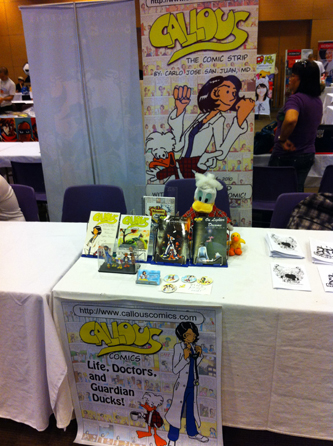 As usual, I was there early to set up my tablespace.

For this comic con, I went all out when it came to my booth display (at least without the aid of electronic media).  I took some advice I got from my participation in Patrick Scullin's #webcomicschat and from Jim Clark & Dave Wachter's (The Guns of Shadow Valley) TGT interview.  The thing about the Independent Komiks Tiangge is that roughly three comic creators/groups share a single exhibitor table.  That leaves roughly a little more than a two square foot tabletop area per independent comic exhibitor.  That necessitated a more vertical display to be eye-catching, so I had banners in front of my table and one behind me as a backdrop.  I also finally remembered to bring the aforementioned figurines (something I kept promising to the sculptor I'd do but would eventually forget in prior conventions) and duckling plushie as well as the Cal Duck plushie (a modified Donald Duck) I made for GTMACCON 2011.  I didn't stack my books on the table like I'd normally do.  This time I propped them up on cheap book holders with a browsing copy laid down in front of them. 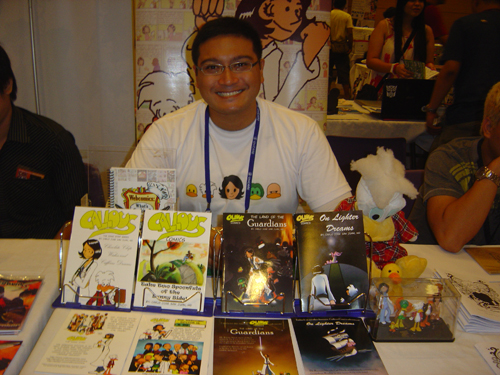 Callous Comics at Summer Komikon 2012
Sales were good (more on that later) and On Lighter Dreams was my best seller this comic con followed closely by Chocolate Chip Wishes and Caffeine Dreams.  I guess that probably meant that I had a lot of returning customers but still picked up a fair amount of new readers.  I also sold a few button pins and a poster by Ernest John Daryll Fiestan.
I also "field-tested" a T-Shirt design.  I'd ask people who'd stop at my table for their opinion on the shirt.  I got enough positive feedback to warrant serious consideration into its production.
But of course, I wasn't all business during the comic con.  At least to me, it's about meeting people and catching up with good friends. 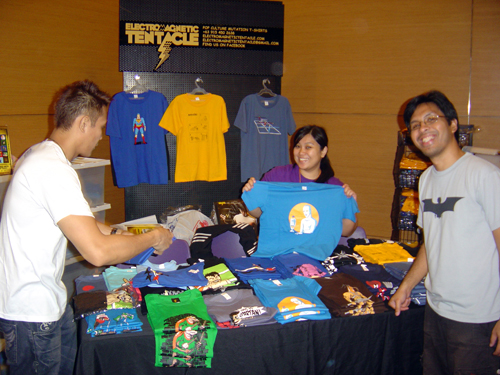 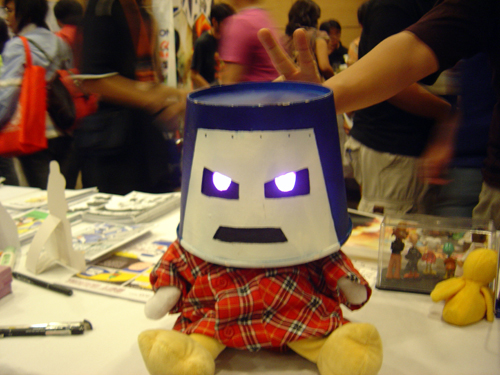 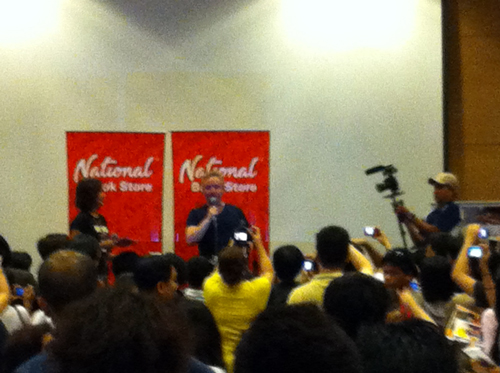 The view from my table: Mr. Mark Millar himself (he was hilarious) 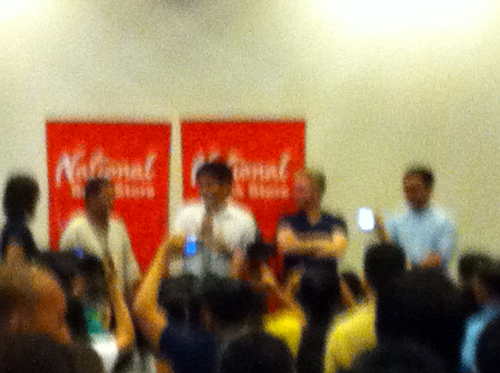 There's only so much a smartphone camera can do.  This is the Supercrooks gang:Gerry Alanguilan, Leinl Yu, Mark Millar, and Sunni Goh. 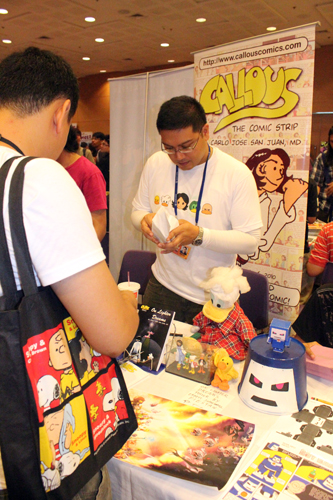 Here I am trying to compute change in my head when the whole time my phone had an app for that!  Loved this guy's bag. 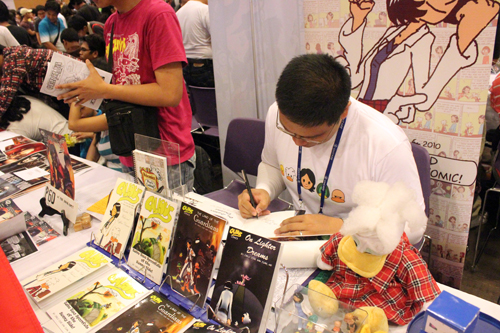 It's the norm, I sign every book I sell unless asked otherwise. 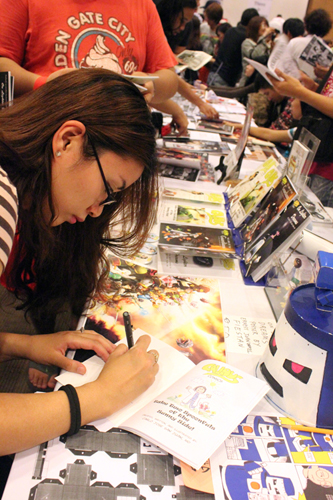 Take Two Spoonfuls of the Sunny Side! cover co-artist Dr. Joyce Dancel passed by just as a couple of lucky buyers got their copies.  Joyce was happy to sign their books as well. 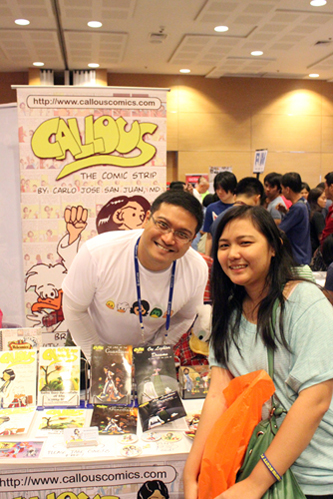 I was delighted to finally meet this lady, Patti "The Cheesemaster"!

I got to meet a few "tweeps" this comic con.  It's an absolute pleasure to finally meet these wonderful people outside of Twitter.  I only regret that I couldn't chat with them longer, being stuck behind a table and all.  Nevertheless, I was delighted to meet them all! :)
Now the bad news... I finally encountered an inquirer I wasn't too fond of.  I won't give away who this person was though.  Still, it was an experience I could have gone without.  Really, I was too old for it.
Now the great news... Komikon awards the highest earning independent comic exhibitor with a free exhibitor booth for their next event and for Summer Komikon 2012... I was the winner! 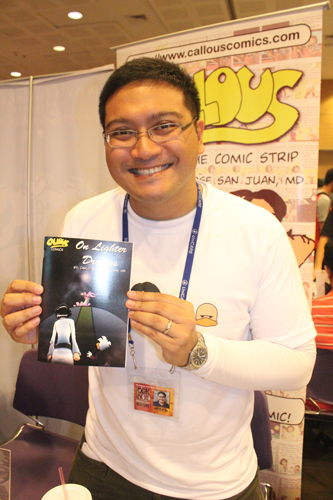 With my best seller this comic con, the gorgeous On Lighter Dreams

I packed up an hour before the convention ended to get the chance to roam around the event hall.  I picked up a few independent titles.  I was amazed to find one of my favorite comics, Massimiliano Frezzato's The Keepers of the Maser 1: The Second Moon being sold in the Happy Lockjaw booth.  It's such a rare gem.  I'm glad someone bought it.  I bought a few back issues of Heavy Metal and the Spy vs. Spy Omnibus.
Finally, the convention closed and we independent artists gathered around to do what is quickly becoming a tradition... have a quick post-convention mini party!  There was a bit of dancing and a cake to much on (thanks again, Tepai!) and just a great sense of, I don't know, victory amongst us all.  Perhaps it was the post-convention high or the knowledge that we once again did our part to keep comics alive in the country.  Or both.
Well, that's it for now.  I'll post more pics from the event in the page in Facebook soon.  Thanks to all who gave Callous Comics a chance and those who continue to support it!  I truly appreciate it!  And a big thank you to those who support Komikon and other conventions in the Philippines!
See you at the next event!  And particularly, Komikon 2012 in October! ;)
Next post: Komikon...
Previous post: Coming Up: Summer...