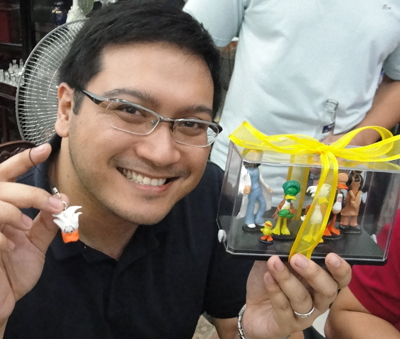 I love December.  This month, the humid heat of this little nook in the tropics I call my home gives way to a nice, cool breeze.  Even as you walk down the street there seem to be a lot more happy faces than usual.  It's a great time to be in my part of the world!

December, as you all know, is where the holiday season reaches the peak of it's soaring crescendo.  You see, in the Philippines, the build-up toward Christmas begins in September.  It's that big of a deal here and the festivities are intoxicating.

But to those near and dear to me, December is also where my birthday resides.  The past few years, however, showed diminishing importance to that day.  I just don't celebrate it anymore.  Sure, I have dinner out with the family and I get a present or two and that's all wonderful.  But this year, that wonderful-ness got a steroid shot to elevate its status to AWESOME.

Firstly, my wife gathered up my closest friends and threw me a surprise party!  I have never had one before and (after a prolonged moment of confusion) I was incredibly touched.  So we all had steak, pizza, beer, spaghetti with meatballs, and a whole bunch of laughs when suddenly my dear wife prepared me for yet another surprise!

Not too long ago, I featured on this blog a Cal Duck pendant by the amazing Rommel "Omeng" Estanislao.  Apparently, she contacted him in secret shortly afterward to commission some work from him to give to me as a gift, which he gladly accepted.  And during that surprise birthday party, she unveiled his work. 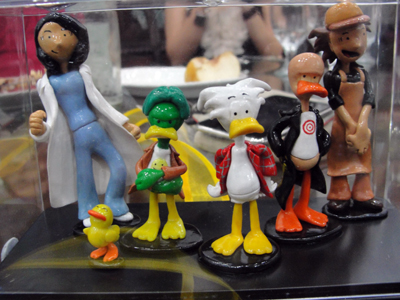 Isn't that just freakin' AWESOME?!  Hands down, one of the most thoughtful and downright best gifts I have ever received.  EVER.  I also got the aforementioned pendant, which is just as awesome!

So to everyone who made last night so great, thanks!
I'll post more pics of the figurines on the Callous Page on Facebook, so be sure to check them out there!

And to my beloved wife, BeL, you are absolutely incredible. Thank you so much!
Next post: Back to the...
Previous post: Ambush