Posted by Carlo Jose San Juan, MD on Wednesday, November 17, 2010 Under: News, Announcements, Events
Earlier this year I sat behind a table at the 2010 Metro Comic Con.  That was my first comic con whether as an artist or as a fan and it was an absolutely wonderful experience.  The one problem with being behind a table is, well, being behind it during the whole event.  I didn't get to walk around as much as I wanted to.  Nevertheless, it opened my eyes to the wealth of talent in the local indie comic scene.

Last weekend, the much-awaited Komikon 2010 took place.  As much as I wanted to participate, I couldn't due to non-comic matters.  However, I saw this as a great opportunity to go around and explore... to experience a comic-con from the other side of the table (yes, I visited PICCA and enjoyed it but that was structured differently).

So, after work (which meant I was wearing work clothes: long-sleeved shirt and all), around 2PM, I entered Starmall and had a bit of trouble looking for the Trade Hall.  I knew from various posts and tweets online that it was on the second floor but after wandering around a bit I was starting to fear that I might have gone to the wrong Starmall.  I chanced upon the mall's food court and saw an ongoing event which from afar I thought might have been one of Komikon's panels.  It turned out to be a demonstration for cooking ware.  As luck would have it, next to the cooking demo was the line for Komikon's ticket booth!

Once I purchased my ticket I was treated to a poster of the event, a floor map, and a Komikon cardboard fan.  Initially I thought the fan was odd but more on that in a moment.  The Trade Hall was packed with people and the air conditioning struggled to maintain a temperature compatible to human life.  Well, that's an exaggeration but it was hot.  That Komikon fan I mentioned?  Genius.

The sight of the crowd was close to overwhelming.  But hey, for some strange reason, I was excited!  I rolled up my sleeves, got my camera and wallet ready, and braved the sea of humanity...

From the get-go I knew I was headed for the indie comic tiangge but I caught the familiar sight of the Electromagnetic Tentacle booth and decided to visit them first.  I chatted with my old friend, Janlo Cui, for a while and purchased one of their clever T-Shirts (the one where mini Spider-Man and Venom are about to do battle while dangling from a handheld stick).  I like almost all of their pinoy-folk twisted comic-inspired designs, but for some reason that one stood out to me. 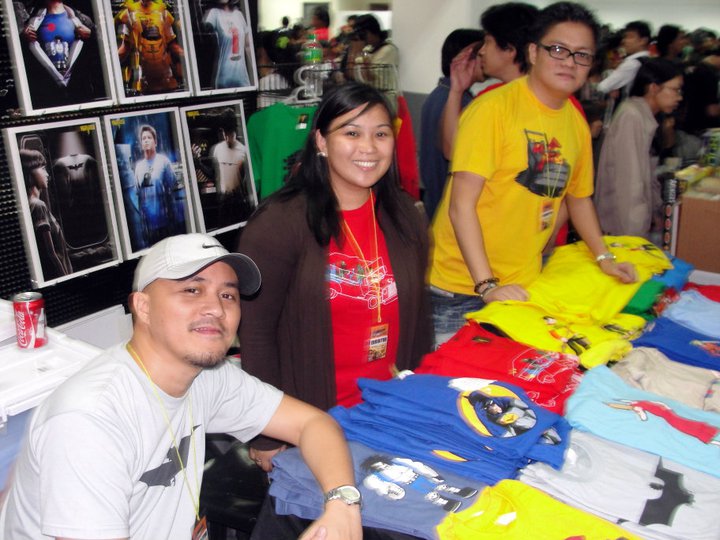 I then headed for the indie comic tables which were situated in a very prime central location on the floor, as it was as well in Metro Comic Con.  It was perhaps an clear recognition as to where the heart of the local comic scene is and I'm inclined to agree if that is the case.  So after squeezing through the masses of Manix Abrera fans, which I thought was awesome (that he had that many fans, not the squeezing through), I wound up in the indie comics area.

I just had to get the second issue of Jeri Barrios' Estrella.  It has a nice old-school origin story and a heart-of-gold lead character which was surprisingly refreshing.  The lovingly-crafted signature wraparound binding strip was pretty classy. 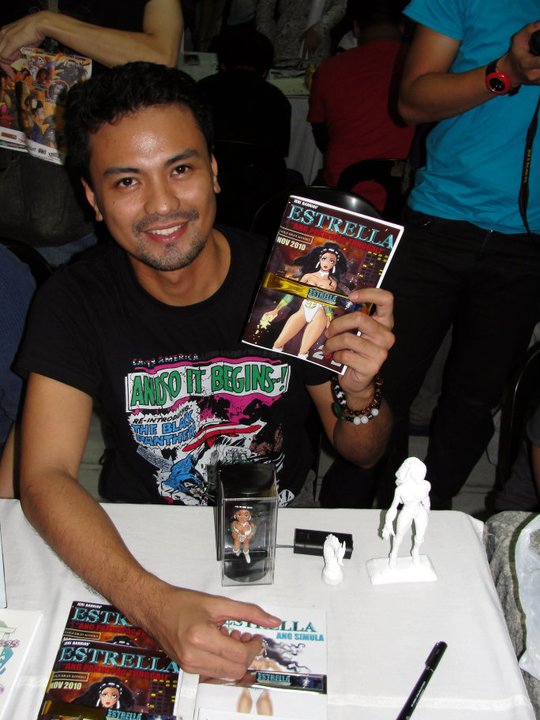 Next was fellow webcomic Work in Progress by Hub Pacheco and Teddy Pavon.  I first encountered this pair while they were giving out introductory pamphlets during Metro Comic Con.  They released their print edition of the first chapter which also included some bonus content.  The book production is fantastic.  The spirited writing and lively art won me over instantly and I turned out a big fan because I "get" the humor and I identify with what they're trying to say. 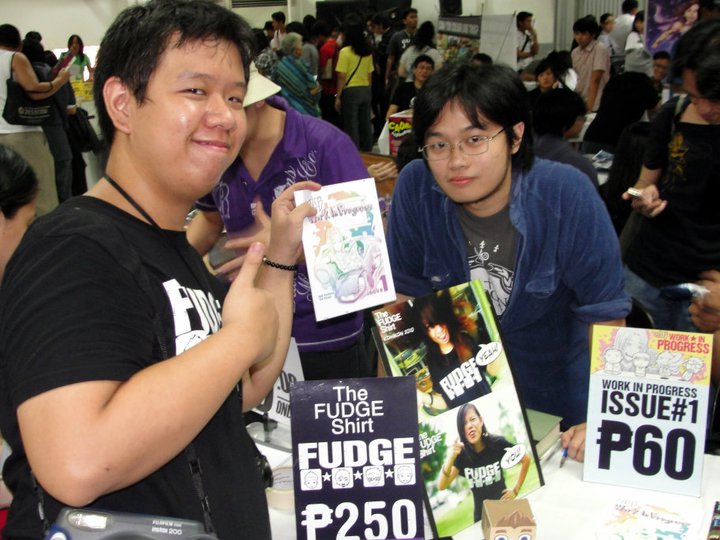 Also present at their table was their FUDGE T-shirt and the papercraft figure of their main protagonist, Eli, who made online waves after this year's International Read Comics in Public Day. 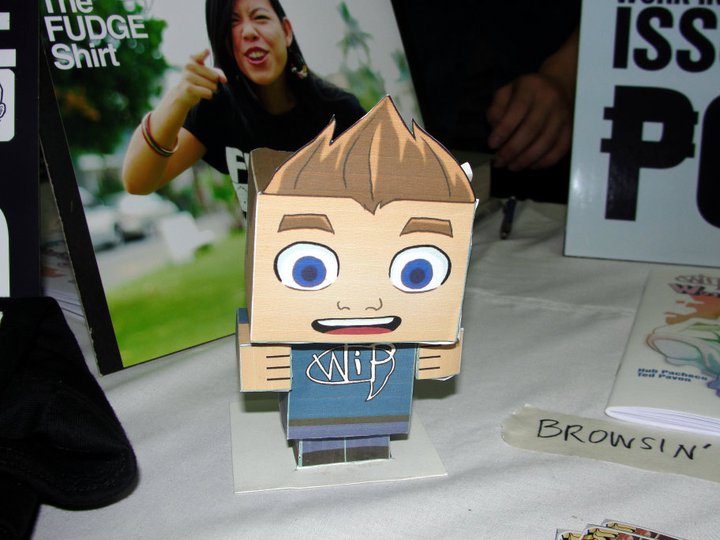 Fun guys Carlo Valenzuela and Norby Ela were also present.  Carlo released his second issue of Boy Bakal which always manages to crack me up with its local-color driven and gloriously simple humor.  Norby and co-writer Nina Simone released their third issue of the delightful Yo, Bo! comic.  Ela also debuted his haunting comic, Gutom. 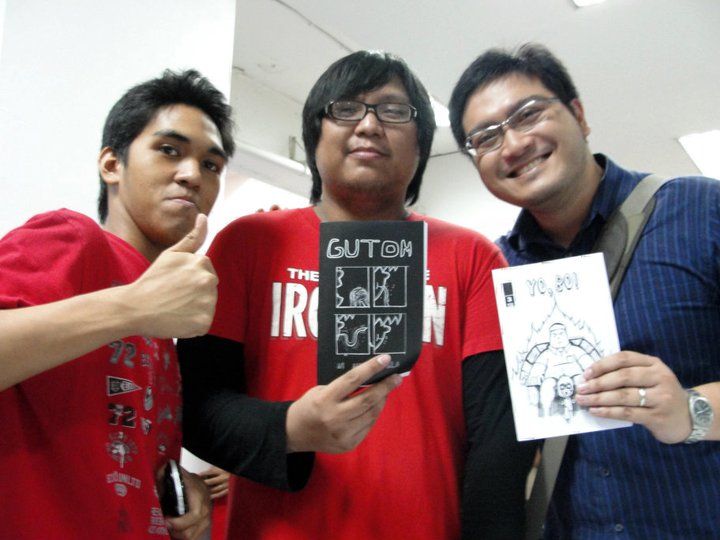 Carlo Valenzuela, Norby Ela, and myself with Gutom and Yo, Bo!

I had wanted to get myself a copy of Lady Storykeeper's latest Realm of Dreams but she had sold them all by the time I got there.  Still, I got a cute keychain of her Dragon Kid character and a signed copy of Oddfellows. 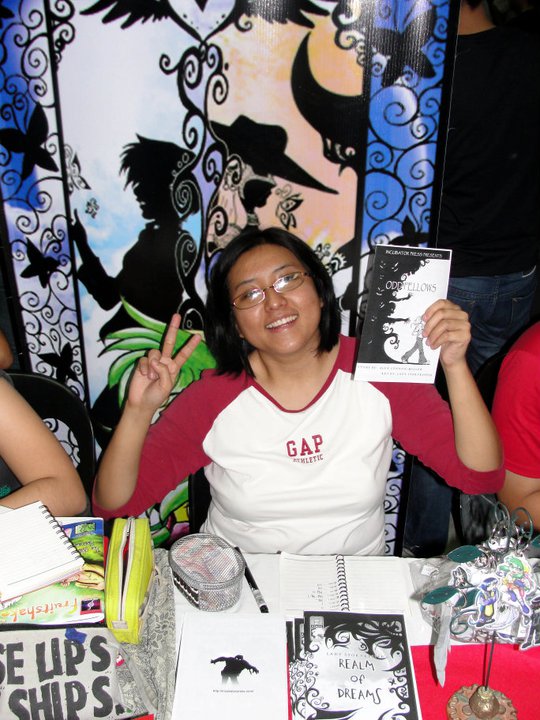 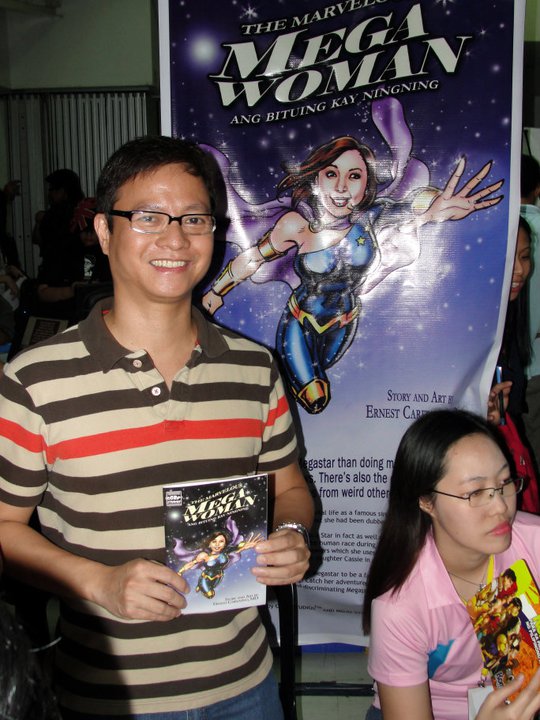 The brilliant Hazel Manzano (Callwork) and amazing Andrew Villar (Ambush) released their collaborative effort, Hard Core, which turned out to be a very interesting read and I definitely enjoyed it! 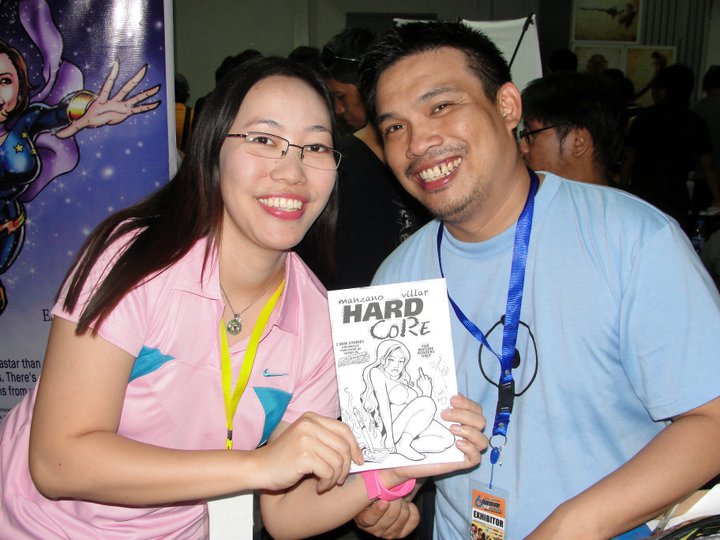 They also worked on Boink! comics among many other artists which was an absolute delight to read. 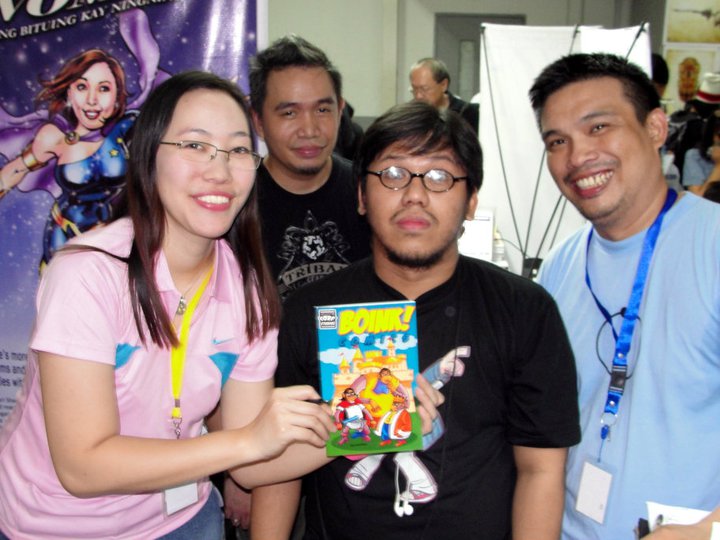 Hazel Manzano, Greco Milambiling, Julius Villanueva, and Andrew Villar... just some of the many "Boinkers" behind Boink! Comics!
I also picked up Freely Abrigo's Kulas and Kapitan Tog books.  I didn't get to talk to him much during Metro Comic Con as we were situated pretty far from each other so it was nice to have a little chat with him. On his table was another popular papercraft figurine, Kapitan Tog! 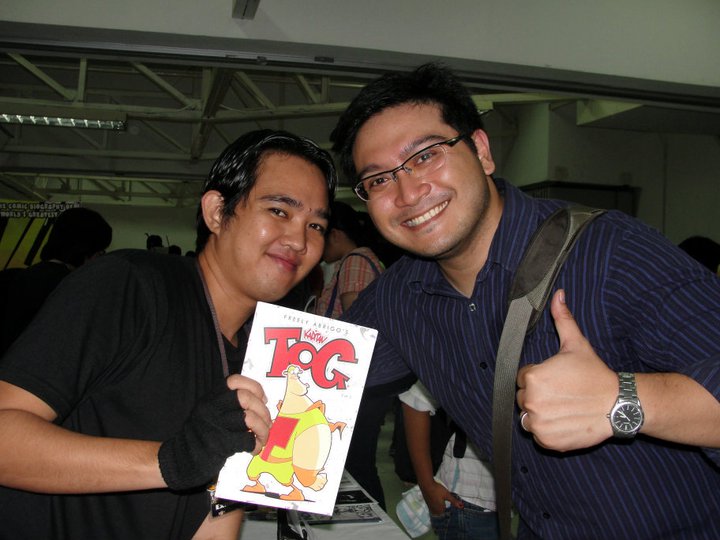 Freely Abrigo and myself with Kapitan Tog 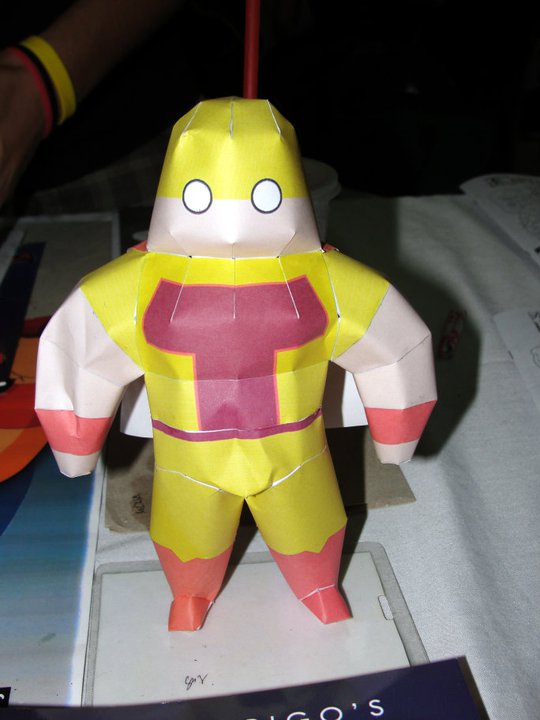 So, I did my rounds of the indie comics section then wandered about the floor.  It was nice to see sir Jun Lofamia at work.  I had wanted to chat with him but he was continually busy drawing commissions.  Some of the other tables I wanted to visit were perpetually crowded during the time I was there so I couldn't pass by.  I ran into some old friends as well, which is always a good thing.  There was an ongoing panel on stage which I had trouble hearing due to the noise from the crowd.  Nevertheless, it was an overall positive experience.  I had a blast!

Oh, it was great to be recognized by some people who were looking for Callous.  I'll try to be in as many comic cons as I can get into next year, friends!

Check out my photo album in the Callous page on Facebook for more pics from the event!
Also check out sir Gerry Alanguilan's still-growing list of various posts on Komikon 2010!

And finally, the comics and merch I bought in Komikon 2010! 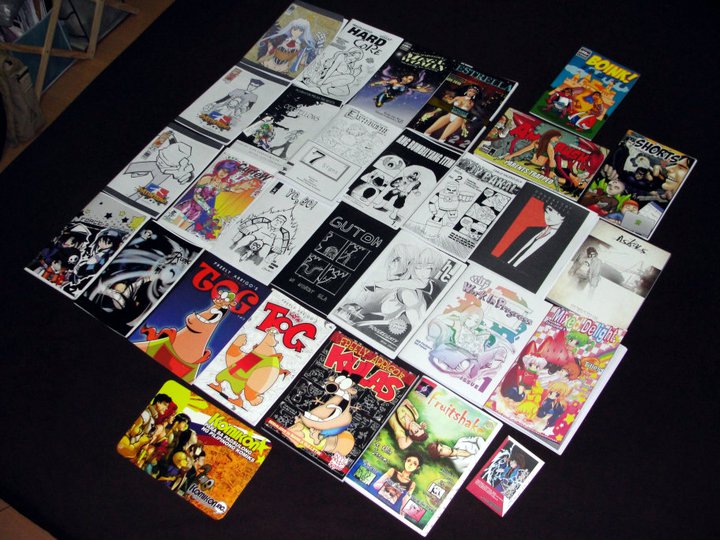