Hey everyone!
Well, what do you know?  My little comic strip is 17 years old!  I would never have thought that many years ago that this day could be a reality... yet here we are.
It's still so surreal to me that the once deeply hidden side of me would eventually spawn a second profession.  Thank you to everyone, readers and friends, for being so supportive!  And to those who have expressed just how much my work has brightened your day, as long as I can, I'll move mountains to keep at it and maintain that ray of sunshine on you when you need it!
But enough about the last 17 years.  Callous Comics is about embracing today!  And today we have a whole bunch of great guest art and comics from good ol' friends!

First up we have one of the very few writer/artists in the world who I'd actually consider handing over Callous to (should the need ever arise, that is).  She is Cátia Ana da Silva from Brazil, a wonderful artist who not only introduced me to the Portuguese language but also produces one of the best webcomics I know of in any language: O Diário de Virgínia!  She has already contributed two guest spots for Callous Comics in the past (Click HERE and HERE to see them) and I'm always delighted to see her work!  Cátia Ana, for gracing my comic with your awesomeness once more, Obrigado!  Oh!  Follow her on Twitter too! 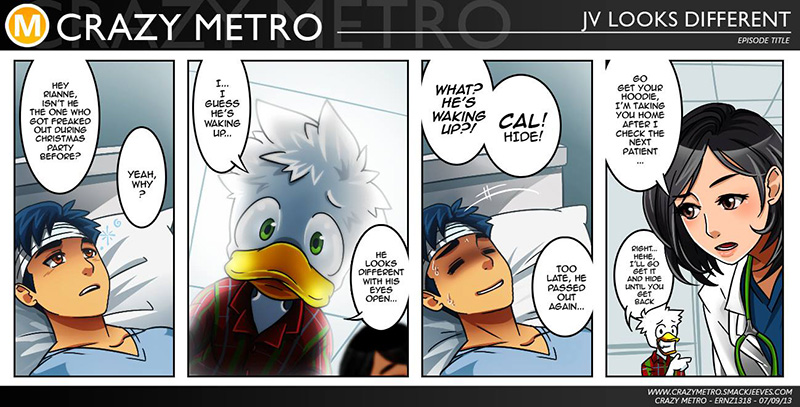 Nestled away in a quiet area of a comic convention here, you would sometimes find the artist of the above comic strip to be hard at work at trying to fulfill an unsurprisingly long list of commission requests.  This stunningly good artist is Ernest Fiestan, someone longtime readers of Callous would know quite well!  He has a webcomic called Crazy Metro and has contributed numerous guest spots for Callous already!  In fact, this is a continuation of a running gag of his, where one of his characters, Nurse JV, repeatedly runs into Cal Duck in plain sight.  Check out his previous guest work by clicking HERE, HERE, HERE, HERE, and HERE!  Whew!  Also check out his deviantART site, his page on Facebook, and follow him on Twitter!  Psst... also check out his renditions of The Black Queen and the entire cast of On Lighter Dreams!  Thanks, Ernest! 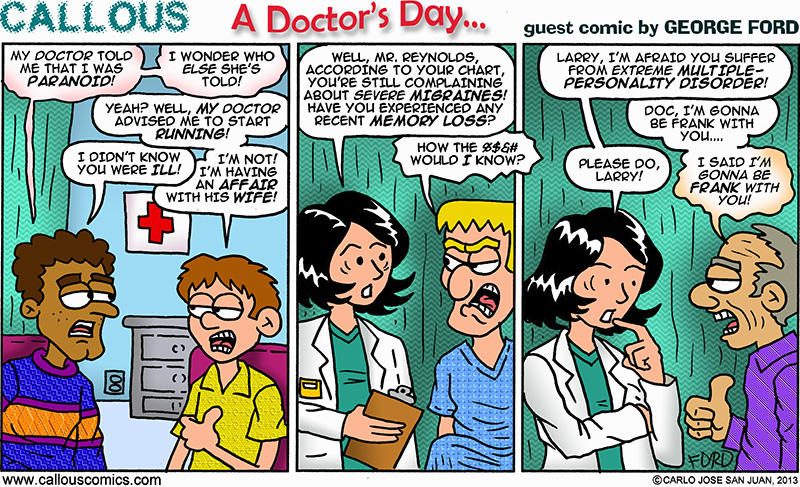 How many gags can one fit into a gag strip?!  George Ford is one of the friendliest and most hilarious people I've known in the webcomic world, so there's hardly ever a dull moment in his comic, Addanac City!  Whenever I have the chance I check up on Hank Addanac and his world and never leave without a laugh!  So hit the link to check out George's comic, like it on Facebook, and follow him on Twitter!  Thanks so much, George!

Lady Storykeeper has graced Callous with another guest contribution this year!  This time it's from her webcomic, One Floor Up!  Check out her previous guest art HERE!  Thanks again! 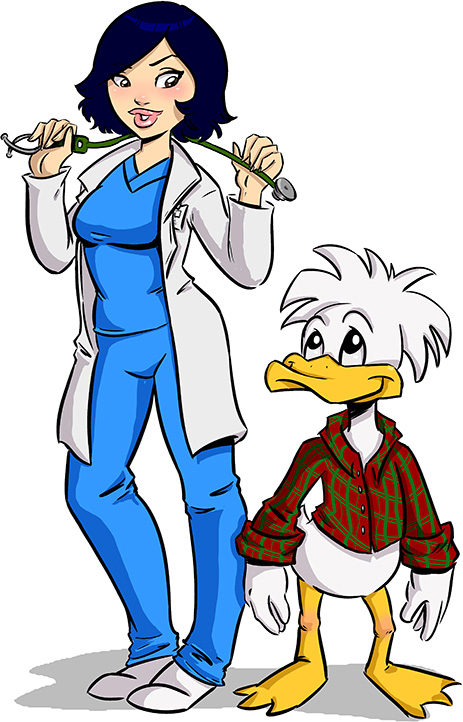 I first met Danielle when she was a few pages into her webcomic Life with Death.  Since then she has become quite a successful artist, providing artwork for Moonstone Books and producing fantastic sketch cards!  I absolutely adore her art style and seeing my characters through it is an absolute delight!  To see a little bit of what I mean regarding her gorgeous work, check out her Blog and deviantART!  Like what you see?  Get your own piece of awesome sauce by purchasing her artwork!  Also, follow her on tumblr and Twitter!  Don't forget to give some like-love over on her Page on Facebook!  Thanks so much, Danielle! 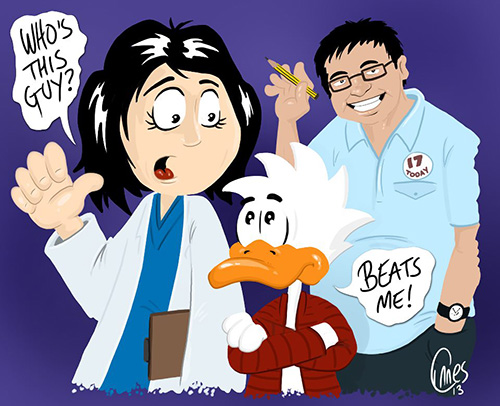 Back when I started publishing the webcomic daily I met Calvin Innes, an incredibly talented and hardworking comic artist from the UK.  Soon after, he launched his own company, My Little Big Town, and has since been going on a steady climb to success!  It's very heartwarming to see him doing well, as he did take a road less traveled and worked very hard to get to where he is now... and he's not done yet!  He's been a great supporter of Callous on his side of the world and I appreciate it very much whenever he'd slip my name and my comic into his interviews.  He co-wrote one of my favorite strips that I've ever done ("Woodchuck Philosophy") and I consider him a good friend.  Not to mention, he's helping me celebrate Callous' 17th anniversary with this great sketch of Rianne, Cal Duck, and... yeah that's me. :)  Follow Calvin on Twitter and like his Page on Facebook!

Thanks to everyone who celebrated with me this year!  Looking forward to many more years ahead!  Brave the World!
Next post: 8 August 2013
Previous post: 6 August 2013