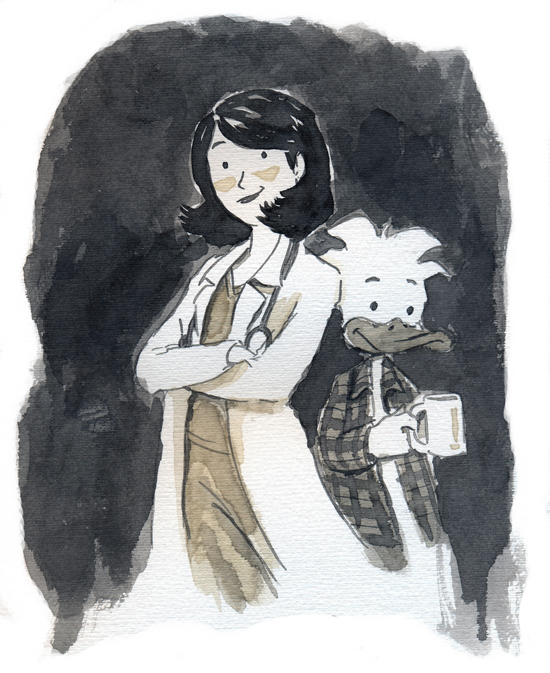 This marvelous painting of Dr. Rianne and Cal Duck is by a wonderful Brazilian artist, Cátia Ana da Silva!  In the e-mail this painting was attached to, Cátia Ana explained that she had been painting (of the non-digital sort) using India Ink lately and decided to use this medium in depicting the main protagonists of Callous Comics while adding an extra touch that Rianne and Cal would love... she also used coffee!

Cátia Ana has an innovative online illustrated tale of a young woman rediscovering herself called O Diário de Virgínia.  I admit that I'm a huge fan of O Diário de Virgínia.  I started reading it not knowing a word of Portuguese, which the series is primarily written in.  I loved her art and enchanting linework so much I had to know what all the strange words accompanying the pretty images meant.  So I typed each and every word into Google Translate and pieced together the tale and it turned out to be something that I could easily identify with!  Considering the nature of Callous Comics, it's really not that surprising that I could relate to her characters so much.

Not too long ago, as a tribute to her wonderful series, I had Amami Bunny cosplay her main character, Virginia, dressed up as "Firewoman".  Cátia Ana returned the favor and had Virginia and her friends dress up as Rianne, Cal, and Mallard!

Thanks again for this guest art and for the wonderful support, Cátia Ana!
Do check out her previous guest comic strip for Callous Comics HERE!

Callous Comics is currently on break and is open for guest work!  If you'd like to be featured, please click HERE for details!