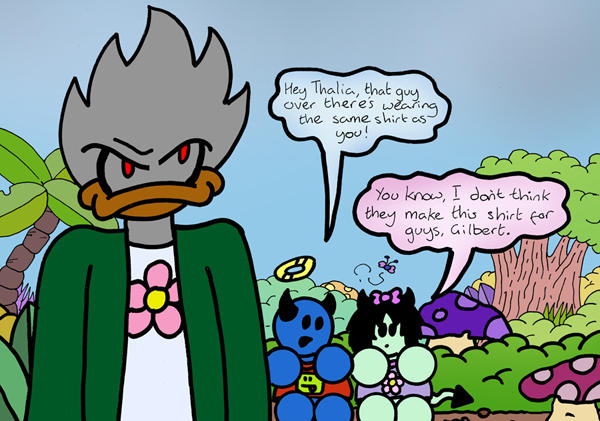 This delightful guest art is from Wendy Wood who does the comic series, Gilbert and the Grim Rabbit!  We've noticed this coincidence before regarding Thalia and Muscovy Duck's shirts and Wendy made this great cartoon off of it!

I first encountered Wendy in 2009 in the Webcomic List forum where she is an admin.  If you do go to that forum and want to personalize your profile picture and signature, Wendy's the person to go to!  But for that time, that's as far as our correspondence went.

Then, in December of 2010, I was quite lucky to draw her name and comic for the Webcomic Secret Santa Exchange.  There I discovered her wonderful series!

Incidentally, my secret santa gift comic for her features my rendition of the Grim Rabbit which eventually became the inspiration for Callous Comics' Amami Bunny.