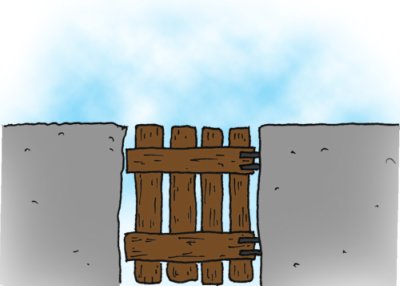 Discover the fantastic and mysterious inhabitants of the inter-realms where diverse and endless worlds await!

Limitless adventures beyond this gate!

The Guardian Ducks undergo a cycle of guardianship where they take turns being a guide to a chosen human.  Currently, Cal Duck is being a Guardian to Dr. Rianne Nicah.

Before any human can enter the Guardian Realm, they must be escorted by Master Kalus.  He is the Keeper of the Guardian Gateway and has a connection to all the inter-realm routes.

He spends most of his time guarding the Guardian Gateway in the cloudy (and cold) inter-realms, usually in utter solitude.  This caused him to have a sort of cabin fever.  He also has an incredible fondness for hot chocolate.

Master Kalus is very powerful with nearly limitless magical abilities.  He is also very skilled with the sword and has trained all the Guardian Ducks in his martial arts.

During his training, Ling Duck surpassed Master Kalus in both skill and power.  However, Ling still considers Kalus as his Master.

Muscovy was once a Guardian Duck before being influenced by his dictatorial charge to try to explore the full extent of his powers and try to take over the world.  After destroying much of the Guardian Realm he was eventually stopped by Master Kalus and imprisoned in an icy prison in space.  He returned recently and almost laid waste to the realms again but was defeated by Dr. Rianne Nicah (as the Black Queen) and her friends.

He is currently undergoing rehabilitation under the close watch of the Swans in the hopes of him becoming a Guardian Duck again.

He is also known as the Fallen Guardian, the Dark Guardian, and the Sixth Guardian.  He is able to summon Stonelings, Rocknaughts, and Mountainoors from the ground.  He wields the mystic sword, The Green Wrath, which can fold into a portable form and whose blade can take any shape the bearer wishes.  He also has a powerful energy blast which caused Decoy Duck to permanently lose all his feathers.

The Swans govern the Guardian Realm and have a grand army.  However, when the Guardian Ducks arrived they harbored an utter dislike of them and their powers.  The Guardian Ducks do, however, recognize their rule of the realm although they know the Swans have no real authority over them.  Nevertheless, the two Guardian classes remain civil to each other.

The leader of the Swans and the one who holds the most disdain for the Guardian Ducks.

He would go to any length to maintain order in the Guardian Realm and to ensure the protection of its inhabitants.  He holds much faith in the visions of Oracle Swan to aid him in his governing decisions.  He also has direct communication to higher authorities.

Chief Swan is also the Commander-in-chief of the Grand Swan Army.

Oracle Swan receives visions from her alternate selves from the future.  She considers her near-omniscience a burden, though, and actually welcomes times when she is blinded to the future.

She gladly shares her visions to Chief Swan, however, to help him govern the realm the best way possible.

The General directly commands the Grand Swan Army.  He obediently follows Chief Swan's orders to a fault and pretty much keeps him informed of all the goings-on in the Guardian Realm, fed by reports from the Trooper Swans.

Coco has the delusion that he is the epitome of every woman's desire.  He is able to speak pretty much any language there is and can run really really really fast.

Still, he is quite the gentleman.

Recently he was named a General of the Grand Swan Army due to his experience in fighting the Sixth Guardian.

Originally merely Dr. Rianne Nicah's persona whenever she plays online chess, the Black Queen appeared when she used the Amulet of Insight during the battle against the Sixth Guardian.  That battle brought the name of the Black Queen to legendary status throughout the inter-realms.

The Black Queen is also the current bearer of the sword, Retskaffenfaust, whose abilities are still a mystery.  However, the Queen and her sword have been seen wielding lightning straight from the skies and enveloping the blade with a crackling field of energy.