Bacolod, Azkals, and the Azkaleros 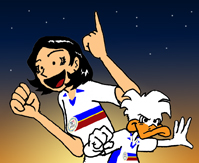 They say a hundred travel books aren't worth one real trip... or that it's about the trip, not the destination.  My journey with the Philippine Men's National Football team began not too long ago (circa 2006, "long ago" is relative, I realize) though it has mostly been through television broadcasts of their matches (2007, 2010 AFF Cup, now called "Suzuki Cup", 2008 AFC Challenge Cup Qualifiers)  and through the various internet forums that have come and gone.  The team was already lovingly dubbed the "Azkals" but that was the subject to an often heated debate.
Then once the amazing run of the team in the 2010 Suzuki Cup was done (where they reached the semi-finals against Indonesia) these young lads had their lives changed overnight.  They became stars.  Darlings of not just the Philippines, but of the South East Asian region.  Whispers of their feats reached far into the footballing world.  Reporters would use the debated moniker and that sealed the team's namesake. The "Azkals" became a household name.
I'm one of those fans who has the schedule of the team's upcoming matches months in advance, so I was well aware of the AFC Challenge Cup pre-qualifying matches against Mongolia beforehand, only the venue was in question.  Once it was assured that it would be held in Bacolod city's Panaad Stadium, I booked a flight and hotel as soon as I could.
Panaad has a soft spot in Filipino football fans' hearts.  It's the unofficial home of the Azkals.  It was once like a secret cool clubhouse that catered only to the few, proud fans of the beautiful game in this basketball-crazed nation.  However, it's a different Philippines today.  Was Bacolod and Panaad ready to host not only the Philippine and Mongolian teams, but the throngs of fans of this new Filipino football renaissance?
Thankfully the answer is yes.  And it seemed they always had been.  They only needed the chance to prove it.
Ticketing was an unfortunate hiccup in the whole experience.  To purchase a seat in the main grandstand you had to be glued to a computer screen to be in-the-know as to when, where, and how to grab those precious, limited pieces of paper.  It was a painful and unnecessarily uncomfortable chore to get them, but it was understandable.  Everything about the Azkals today is a new thing, even for and within the Philippine Football Federation.  In the end I was treated to the not-for-sale tickets in the middle of the main grandstand and ended up selling my hard-won entry passes for the flanking section at cost.
I had the absolute BEST seats in the house, at least when it came to having a good vantage point to see the pitch.  We were situated right behind the sponsored rows. 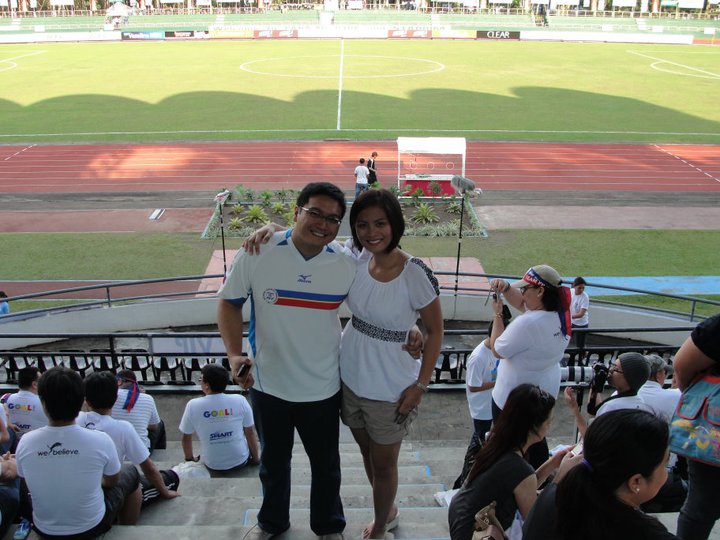 My wife and I next to where we eventually sat.

But being at a football match is more than getting a good view.  It's about the crowd.  Hours before the match was even slated to begin, the stadium was near-full.  And while everyone there was a supporter and fan, the sections that flanked the part I was in was composed of people who really kept close attention to ticket sales.  They begged, fought, and cried for their seats.  They would have shed blood for them.  They're the ones who just HAD to be there that night.  While we indeed had a great view, my friends and I would often look to the sides at the merriment, chanting, and cheering with a twinge of jealousy. 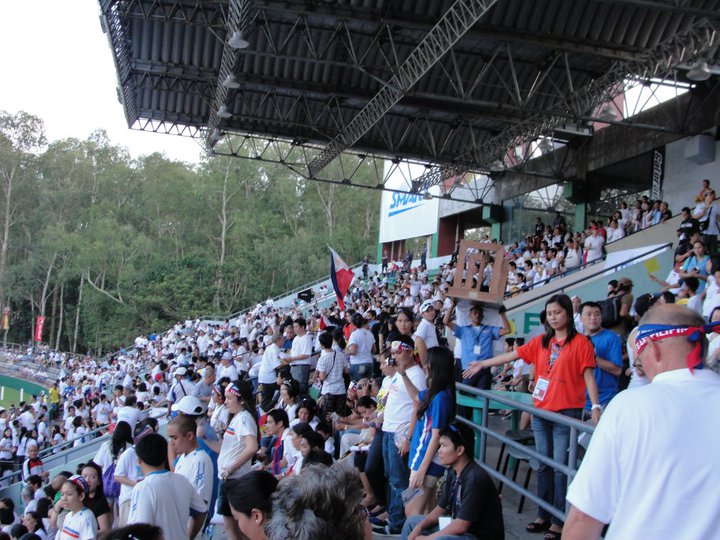 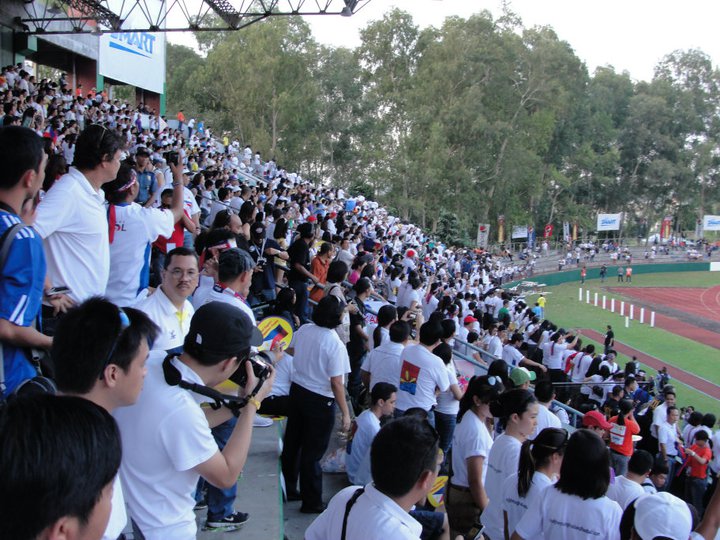 My view to the right and left. Freedom under waving flags, man. 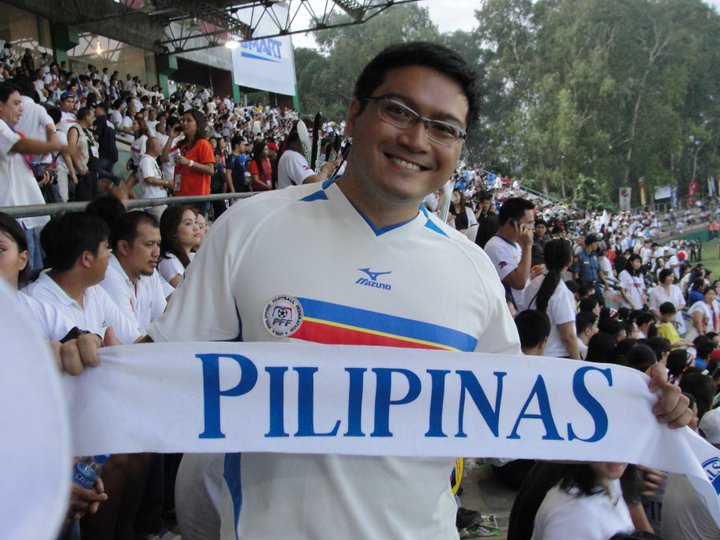 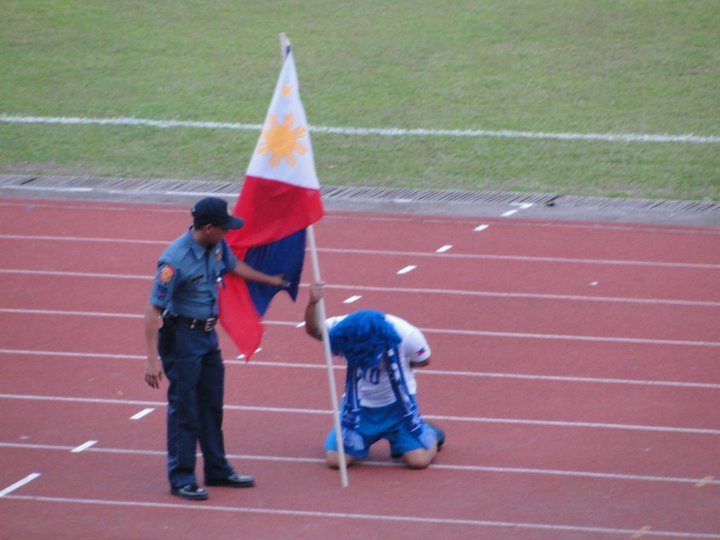 Myself (Above) and the now-famous Ebong Joson, who ran across the grandstand and out into the field with a flag.
Also pictured is the policeman who just had to do his job... earning boos from the crowd. 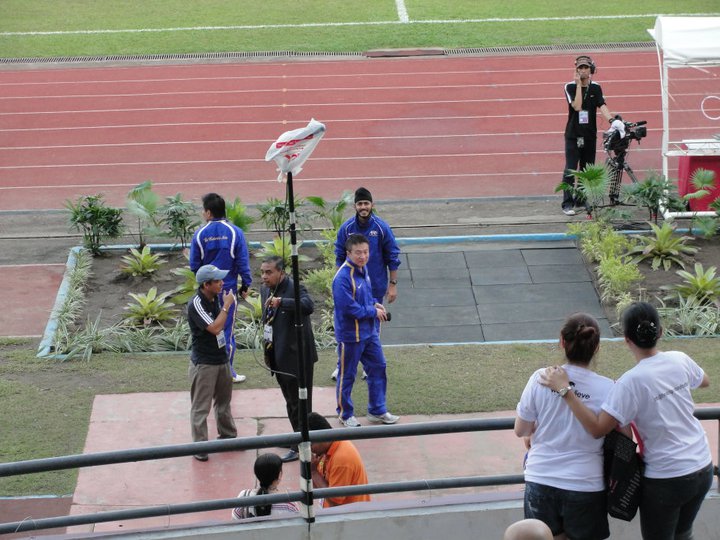 A lot of people thought these were the Mongolians.
But they were the match officials.

It was a very surreal feeling, being in a crowd full of Filipinos with waving flags, red, blue, the sun, and stars painted on their faces, wearing wigs and costumes... for a football match!  It was a dream come true, really.
Once the team took to the pitch, any difference in any section of the stadium was eradicated immediately.  We were all there for them and our country.  Sure, even the giggling girls there to feast their eyes on the players, they too in the end wanted our nation to rise the victor tonight. 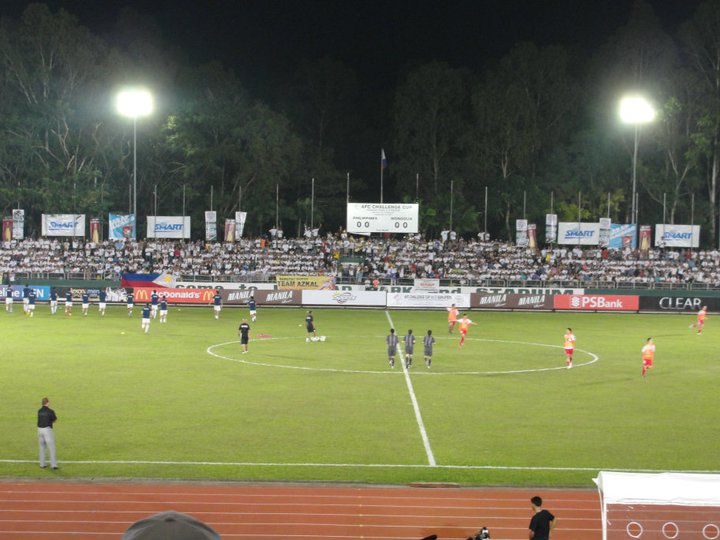 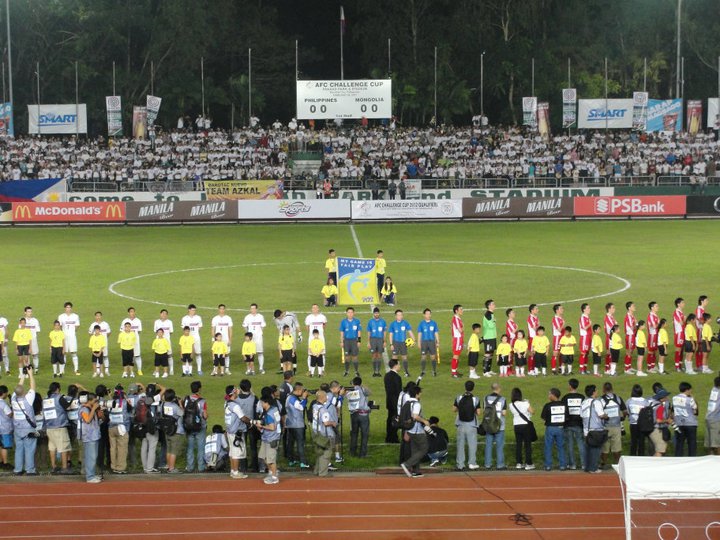 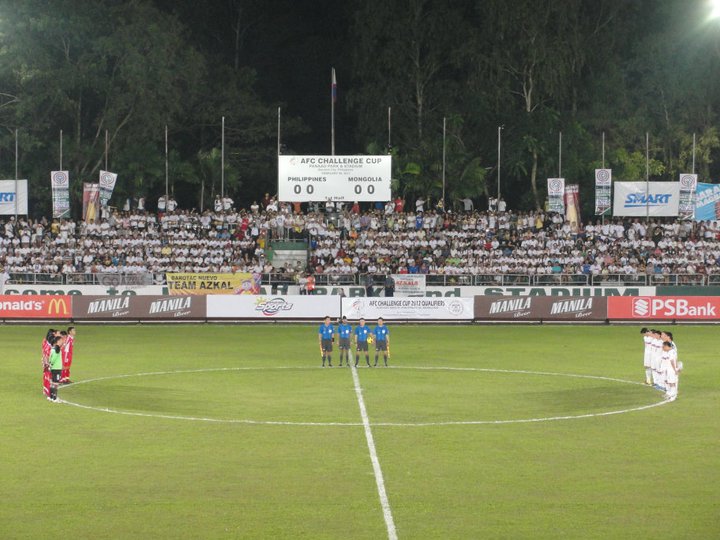 Once the match was underway, the crowd was really into it.  There were chants and cheers.  It was glorious!  The Azkals were clearly the better team, being on the offensive and maintaining possession a majority of the fixture.  However, as is a characteristic of the sport, there were dull moments for those unaccustomed to it.  Sure, football fans were at the edge of their seats but the new fans, and there were many of them, were becoming restless. 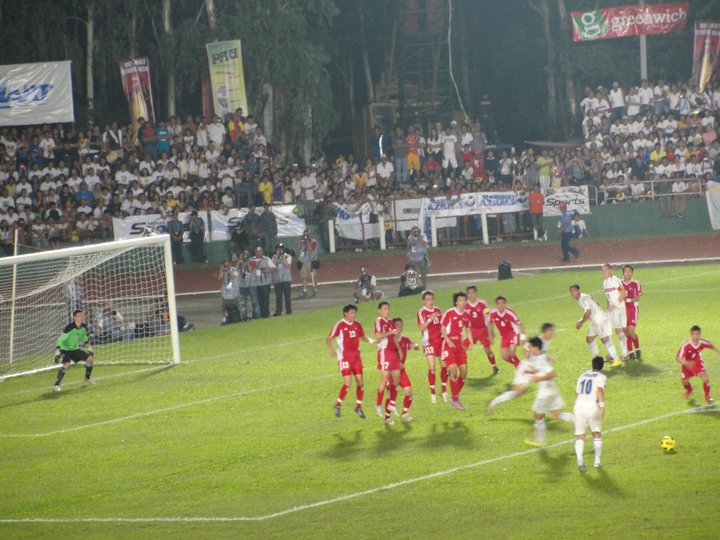 Fooled by a fake free kick, a Mongolian player earns himself a second yellow and a red card. 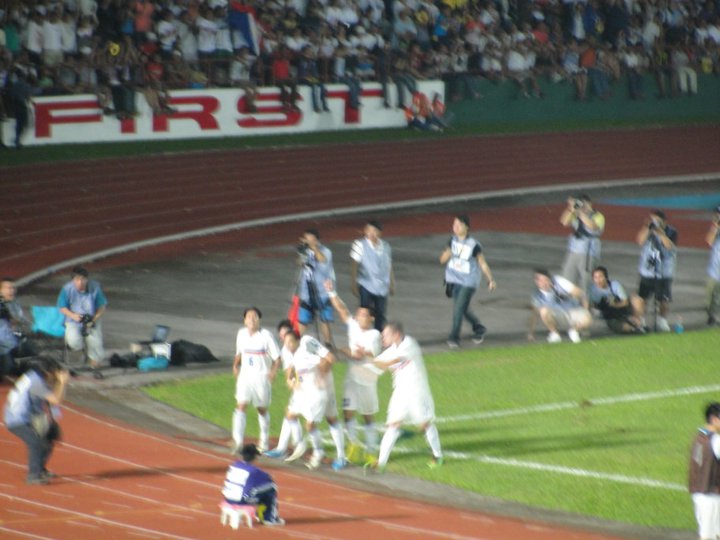 After an amazing goal by Emilio Caligdong, Philippines 1-0 Mongolia

Finally, an astounding goal by the Philippines got the crowd erupting into absolute joy.  The players soaked it all in as well.  Finally, with just that one goal, everyone got it.  Why the wait for it was worth it.  Why football is the most popular sport in the world. 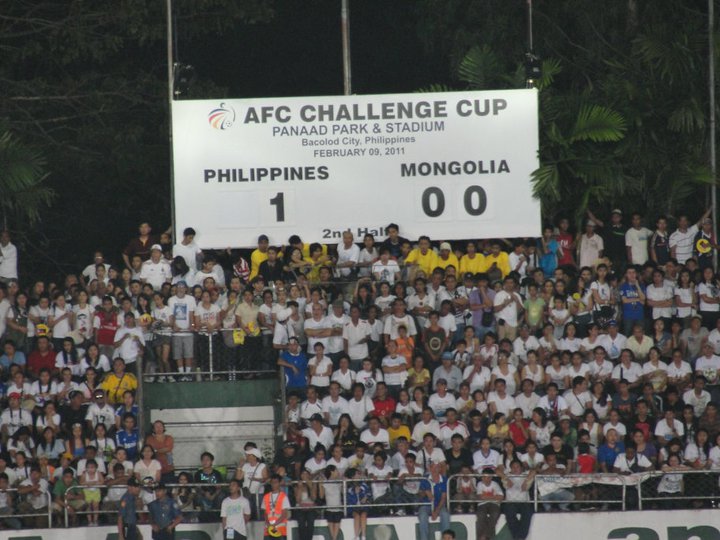 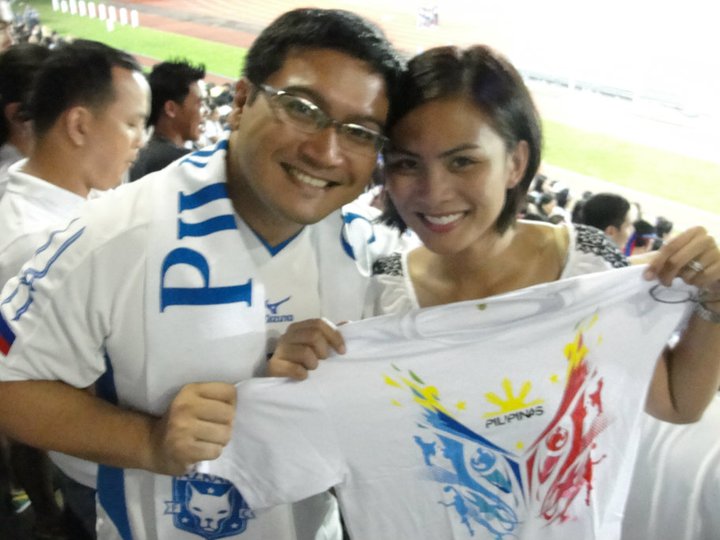 At the half.  Sponsors were launching free t-shirts into the crowd via slingshot.  I caught one!

The second half was more of the same.  The Philippines continued to pressure the Mongolian defense incessantly.  Then, deep into stoppage time, Phil Younghusband scored the Philippines' second goal.  Once again the crowd went rabid. 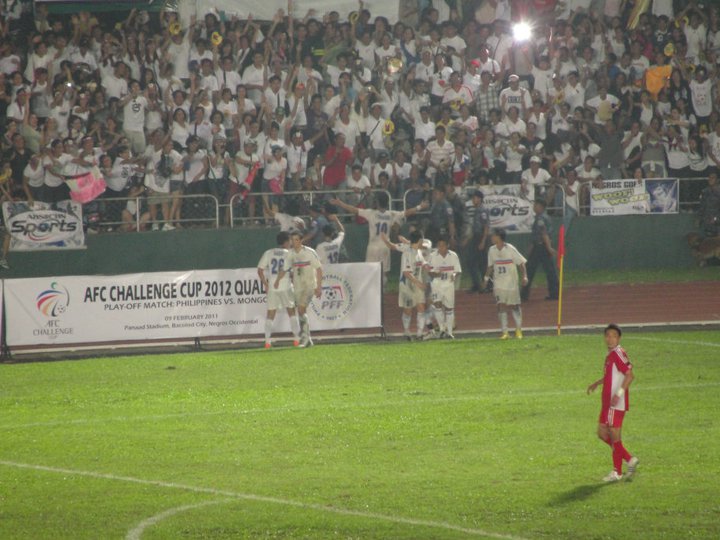 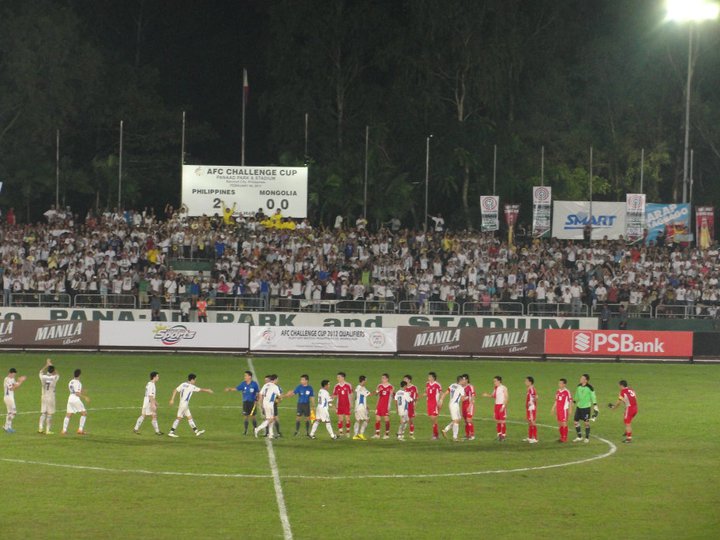 After the Younghusband goal, Philippines 2-0 Mongolia.  The goal was the penultimate kick of the match.

The Azkals circled the stadium, applauding the crowd and receiving a big hand as well.  The Mongolians, tired and disappointed, received respectful applause as well which they seemed to appreciate.  It also reveals an innate character in Filipinos.  We've always been known to be hospitable.  Had this been Indonesia or even England, well... 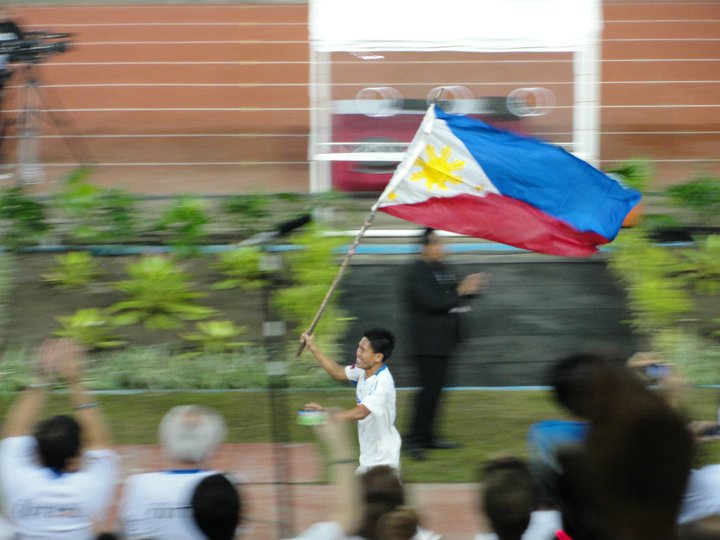 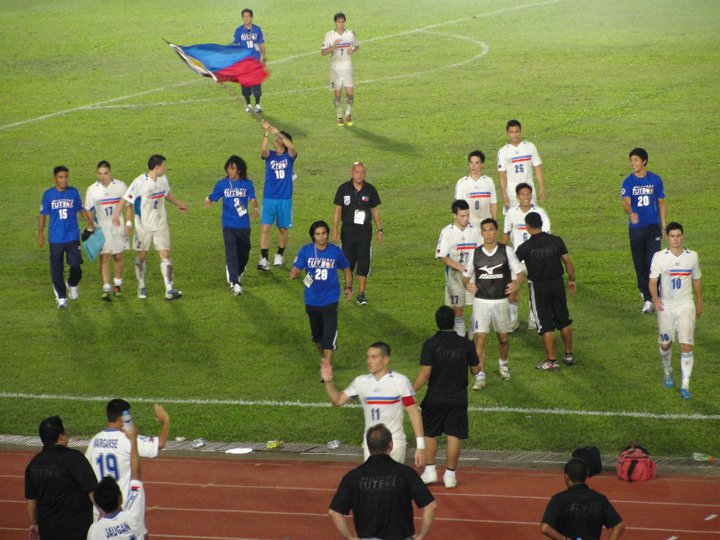 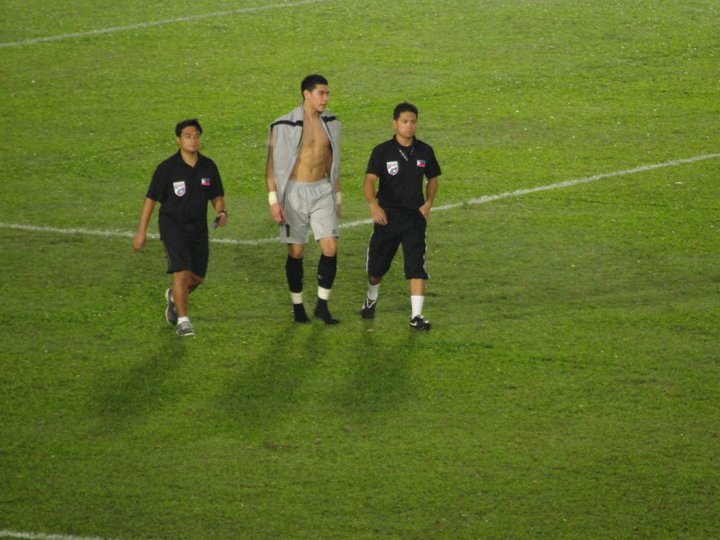 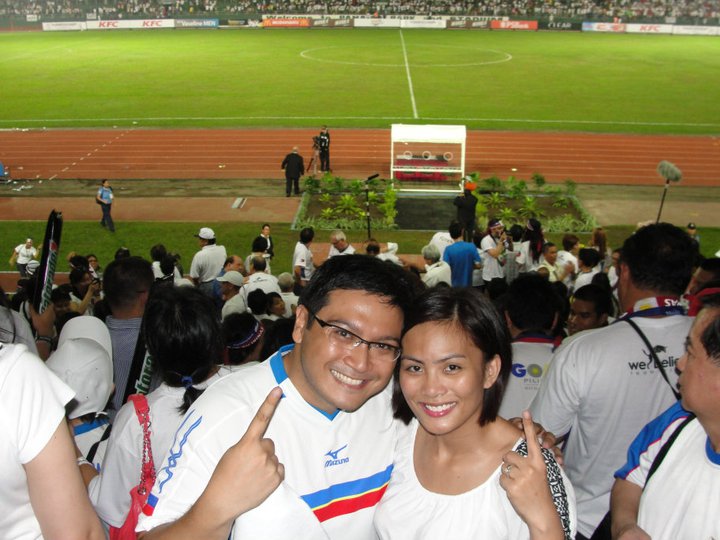 Some scenes from after the match

Fireworks exploded in the sky above Panaad, flanked by lanterns floating upward propelled by the hot air from their flames within.  Some people thought it was too much.  In the grand scheme of the tournament, we weren't really anywhere yet.  But after a while I thought it was appropriate.  It was a celebration.  Looking around there wasn't a single face without a smile.  Azkaleros were barking with glee.  People were hooked onto the magic, stretching with joy after what seemed like a long slumber.  It dawns on an observer that no matter where you are in the world, this is a beautiful game.  And slowly but surely, it's being beheld by this struggling nation's eyes.
Next post: "Heartbreak"...
Previous post: Callous Comics...