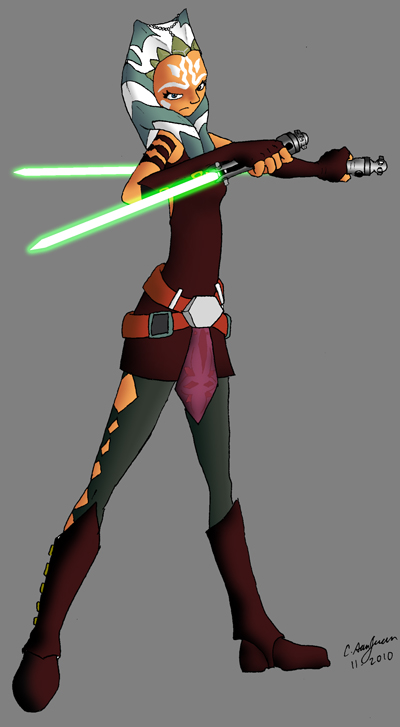 In a recent episode of Star Wars: The Clone Wars (entitled "Heroes on Both Sides"), Lucasfilm unveiled some new CGI character models of some key characters.  Most notable of which, at least in my opinion, was Ahsoka Tano who appeared to have aged somewhat and now exudes a more mature aura about her.  Ahsoka by far is my favorite character in Star Wars: The Clone Wars not only due to the mystery of her eventual fate (because of the feature films, we pretty much know what happens to most of the main characters) but also because she is the most well-developed character on the show.  It's a delight to watch her grow as a Jedi and as a person.

Apart from the new outfit, she also seems to have gone daisho!  Based on a preview video from Lucasfilm, she now has two lightsabers and prefers one of them to have a short blade, much like Samurai would have a katana and wakizashi.  I made the handedness of these weapons wrong, unfortunately, but it's nothing a mirror image won't fix, I guess.

I have never drawn Star Wars fan art before, which is surprising considering I'm such a huge fan of the movies and the Clone Wars animated series (both of them). But after seeing this huge and arguably abrupt change in Ahsoka I was just compelled to draw her.  After seeing it I immediately sketched out this drawing and inked it the following morning.  The rest I did many hours later, using what little references I could get online for colors and outfit design.  Admittedly, this was a rushed piece but I was just so excited!

Anyways, I hope you like this drawing and little peek into my fanboy-ish side!