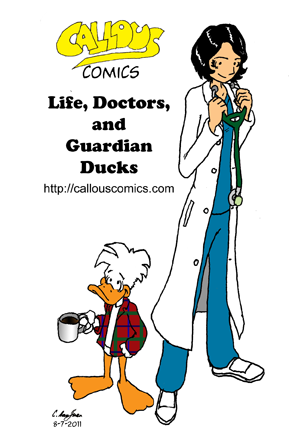 Today, August 7, 2011, marks the fifteenth anniversary of Callous Comics and what a journey it has been!
What takes place in fifteen years?  You can find a good summary in the About area of the site.  But here's the long and short of it, since you're already here. ;)

The Naysayers
Like many comic artists out there I began drawing comics as early as I can remember.  I drew them more than I read them in my very young years.  I had notebooks where I'd scribble quick comics and let my imagination fly.
In high school I became the art editor of the student newspaper and got my first thrill of published comics.  It even featured early versions of Cal Duck!
It was quite a "high", really, to draw a comic strip, have it mass-produced, then see someone laugh because of it.  It's like long-distance tickling!
So the day arrived when I talked to some of my peers (and a teacher too) because I was seriously considering making comic strip production a career.  I was disappointingly told that there wasn't an audience in my country for my art style and humor for I was heavily influenced by western comics.  Ouch.  There would be more people interested in the US, they said, but getting into the business there is far too difficult.
There I was, needing only one encouraging word to let my passionate heart guide my drawing arm to a career in comics, only to get a massive heartbreak disguised by a friendly chuckle of agreement.  They were giving an honest opinion and I accepted it.  Still, every cry of anguish by an American Idol reject received my empathy.  Though I wasn't as dramatic, I knew how they felt.

A Larger World
Fate led me to the first steps in a career in medicine.  During my first year in college, I noticed a poster calling for applicants to various positions in the student newspaper.  Still hearing the disheartening words in my mind from high school, I ignored it.  Nevertheless, I would still doodle in my notebooks.  I would still wonder, what if?
By my second year I finally decided to apply for a position as an artist in my college paper.  I got in!  I drew my first comic strip, submitted it to my editor, and eagerly awaited the first issue of the schoolyear.

Rejected
That first issue arrived and contained two full pages of comic strips!  I looked through each strip in incredible anticipation, hoping the next one would be mine.  However, I reached the end of the second page and my comic never showed up.  I went through the two pages again, double-checking if I passed it in my hurried reading.  Alas, it really wasn't there.
It was rejected by my editor.
There's no audience here for your art and writing. Those words played in my mind again.  And you can't make it abroad.

Perhaps I tried too hard in that first strip.  I wanted to provide a humor that was more acceptable by local readers, or what my early perception of that was.  It was also yelled, "Here I am!  I'm a comic strip made by ME!"
The deadline for the second issue arrived and I submitted a comic strip with far less pomp.  My editor approached me and said I should come up with a title for my series.  Not being able to come up with one, I grabbed a nearby dictionary, dropped it spine-first, and there it was... the first word that caught my eye in the open book was "Callous".  The name stuck to this day.
But more importantly, that second comic strip was published on August 7, 1996.  It also featured a guy and a girl who would eventually be known as Rianne and Ren Nicah.

A Great Run
Callous was published regularly since the second issue.  In 1997, I began posting (poorly) scanned versions of the published strips onto a website.  I had hoped to use this website as an archive of the published comics.  I didn't foresee that there'd be people from other countries reading and they left very encouraging words!  Those and the awards I won during my print run in college left me thinking that maybe, just maybe, I had something here.

Med School Happened
But by the time I graduated I was just as passionate about becoming a doctor as I was a cartoonist.  So I entered med school and well, once you're there the rest of the world pretty much disappears.
However, an opportunity arose when I was approached to be art editor of a new student paper there.  I decided to continue Callous, albeit revamped.  I got a recurring character from the old series in college, made her a med student, and got Cal Duck as her Guardian.

Hiatus (2004-2008)
In my fourth year of med school there was just no way I could do comics.  The same was true in my early medical career.  I began to feel that maybe that was it.  My comic career was dead.  Still Callous wouldn't leave me.  My wedding cake (which I conceptualized) included a couple of ducklings flanking the toppers. 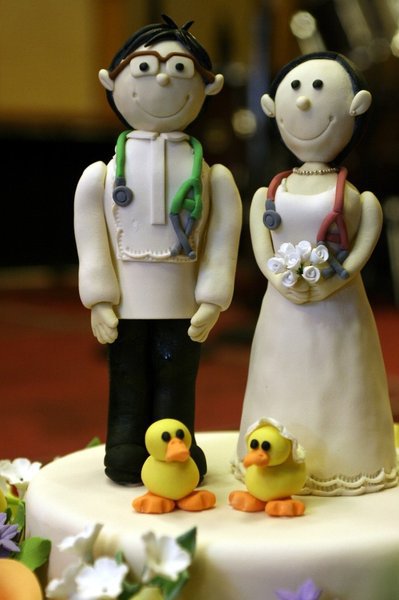 Callous the Daily Webcomic
At some point I realized that I had some time to give comic-making a serious try.  I asked around on what I could do to get into national newspapers.  No one I asked knew what to do so I began to dismiss the idea once more.  Then I started tooling around with another website hosting service and decided to move the website there.  Suddenly, I thought about making a comic strip a day and see how long I could last.  I kept on making comics and more and more people started reading.  I brought the comic into social media and went through the various methods of promotion.  Soon I found myself making friends and people were liking my work!  I started discovering so many other comics online and, well, I was hooked!  The webcomic community is a wonderful thing and there are so many worlds to discover out there!

The Comic Cons
So, after meeting so many creators online and being jealous of their comic con appearances I began searching around on how to join the ones in my country.  After joining several now I love the experience.  It's my only *real* way to reach out to readers in my country where webcomic reading isn't as big as it is in other countries.  And, lo and behold, my stuff has an audience here.

After Fifteen Years
Now I know without a doubt that apart from being a physician, I'm a cartoonist as well.  That's a bit of self-discovery that I couldn't have achieved had I not just "let it all go" and "just do it".  It took a while but it was worth it.  And you know what?  I'm just getting started... :)

Here's to many many more years of Callous Comics!
Next post: The Sitch
Previous post: Guest Comic by...

Tags: anniversary  fifteen  15
« Back to posts