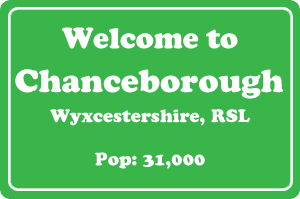 One of the five boroughs of Wyxcestershire of Great Sunfield in the southeast coast of the Republic of San Lazaro.  It is the smallest borough with a population of 31,000.

Its has an international airport which is linked to several railway lines.  These trains are the main mode of transport to the rest of San Lazaro.  Within Chanceborough, the main mode of public transport is the Central Area Transport (CAT) bus system which follow set routes and times and are free to use.  There are link buses to the other boroughs of Wyxcestershire.  There are also commuter trains that span greater distances and are the quickest means of transport between the suburban areas and the city center.

It has one major hospital, Chanceborough Hospital and Medical Center, although there are smaller health provider units and clinics around the metropolitan and suburban areas.

In on the Secret:

Aimee  went through college, medical school, and specialty training with Rianne and is her closest friend.  While Rianne underwent further training in Obstetrics, Aimee took on Pediatrics as another specialty.  They both currently work at the Chanceborough Hospital and Medical Center.

Aimee is the antithesis to Rianne's naivete, often being a voice of reason.  While Rianne seeks to be all she could be, Aimee seems to have already done so, though she would be the first to say that she has much more to learn and that she is no better a citizen of the world and student of life than Rianne.

Audrey is Rianne's niece.  She is a high strung, often over-sugared girl.  Sometimes, her father, Ren Nicah, would ask Rianne to take care of her for a weekend.

Mallard is Cal Duck's immediate senior Guardian Duck.  He is the most stringent of the Ducks as well.  He has mastered all the rules and protocols contained in Guardian Duck literature and is a fond reader of The Chanceborough News.

Mallard loves to write things down.  He has an itchy quill finger.  He is also borderline obsessive-compulsive and loves to maintain order, especially within his own kind.  He abides by rules to the letter and expects others to do the same, if only for common courtesy.

Decoy is the immediate senior Guardian Duck to Mallard.  He also oversees Cal Duck's Guardianship but doesn't speak much.  When he does talk, however, everyone listens.

Decoy is a featherless Guardian Duck.

Ling Duck is the wisest and most powerful of the Guardian Ducks.  He only speaks in
chirps, however, requiring the other guardians to translate what he says to Rianne.  He is unfathomably patient, incredibly intelligent, and immeasurably clever.

No matter what the problem is, Ling always seems to have an answer. 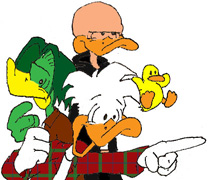 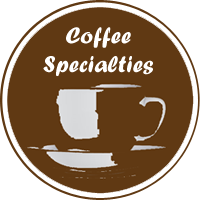 Bel is a harbinger of methylxanthines at "Coffee Specialties",  a cafe Rianne and Aimee like to go to on a daily basis.  She has become a good friend of the two who find it intriguing yet amusing how she dislikes coffee.  She does like the aroma, though.

Bel likes to live a simple life and is perfectly happy working in "Coffee Specialties".  She likes to ride the waves of life and takes things as they are, as they come.

Gray is a movie critic for The Chanceborough News.  He has a great passion for motion pictures and has vast knowledge on the subject.  However, his overly eloquent diatribes and praises for films are an impediment on his social skills, but hey, it pays the bills.

Gray loves movies but hates popcorn.  He prefers to have a super-sized diet cola with him in the theater and nothing else.

Gray met Rianne in "Coffee Specialties".  They have a vast difference in tastes in movies and he believes her input helps him write a more objective review for The Chanceborough News.  So he brings her along whenever he watches a movie he is assigned to review.  Rianne gets to watch movies for free which she considers enough payment for her input.

Gray had professed intimate feelings for Rianne.  She turned him down at first but his fight in her honor against D'Shay in the Guardian Realms have since caused a change of heart.  Gray became Rianne's significant other for a time until all memories of their intimate relationship had been wiped by Michaelis and Muscovy Duck.  They remain good friends.

Ree is a budding artist who makes a living selling her paintings.  She is also a former compulsive kleptomaniac.  During relapses, she is aware of her actions and is honest about it, voluntarily giving back what she takes with a bit of embarrassment.

She often visits "Coffee Specialties" for hot chocolate and gets into strange conversations with Bel Bean as the two can't seem to understand each other in spite of speaking the same language.

Ree is also Rianne's gateway into the art world as she is well-versed in its various forms.

Sherwin is a frequent "Coffee Specialties" patron and college friend of Rianne and Aimee.  He often has to lend a friendly ear to his medical friends as they vent to him their frustrations.

Sherwin is a clever and crafty entrepreneur.  He would try to convince "Coffee Specialties" customers to invest in whatever he's into at that point in time.  He's also a bit of a prankster.

Sherwin is also a bit of a realist and a pessimist.  However, out of respect, he's quick to pull back on his opinions whenever he feels that they disturb his friends' ideals.

His parents have the same last name but are unrelated, hence his unique name.

Ren is Rianne's brother.  He is married to Victoria Nicah and father to Audrey and Hugo Nicah.

He majored in English in college and is currently a junior consultant at a consulting firm, which Rianne finds to be the vaguest job description ever.

Ren is often out of town on business and he would leave Audrey with Rianne during such times (on his daughter's request).  Since Audrey had already discovered the Guardian Ducks, Rianne has no problem with her keeping them company and vice versa.

Ren, unlike Rianne, is perpetually calm and has an uncanny knack for keeping composure under pressure.  He is also an avid player of Massive Multiplayer Online Role-Playing Games which he spends most nights on.  Couple that with working during the day and you find a man who hardly ever sleeps.

Victoria is the wife of Ren Nicah and mother to Audrey and Hugo Nicah.

She is an elementary school teacher at Audrey and Hugo's school.

Victoria is a very opinionated woman who has to blurt out her feelings about anything at any time.  She means well, of course, and sees her unsolicited advice as a means to improvement.

However, she is also a good listener and accepts corrections when she is shown to be mistaken.

Baz Vulpine a.k.a "The Baz"

Baz is Sherwin's frequent prankster-at-arms.  But when not up to no good, he roams around the streets of Chanceborough's metropolitan area, rockin' out with his headphones on.

Otherwise, not much is known about The Baz.  He's considered harmless, playing his no-goodniks with naughty innocence.  It's not hard to see that he has a good heart.  All you have to do is look beyond the pie in your face (he threw it, of course).

Hugo is Audrey's brother.  He's a clever boy who often seeks ways to make things better or to find rule loopholes so he may have some fun.

Hugo often wonders why Audrey insists on staying at Rianne's house when their father's away.  But he shrugs it off as a "girl" thing.

Very prim and proper and wise beyond his years (which is already fairly advanced), he places great importance in decorum and patient care.

"You know, THAT guy... whatsisname... I always see him around but I haven't had the chance to meet him personally.  He's even in my department!  Anyone know his name?  No?  But you know who I'm talking about, right? Yeah... him."

"I'm sure the nurses know him.  He signs his name in the charts, after all.  Ask them?  No!  That would be embarrassing!  I've been working with him for quite a while now and I still don't know his name!  What would the nurses think of me?!  Ah, heck, I'll be patient.  I'm sure his name will come up someday..."

Francis is the usual nurse-in-charge of Rianne's patients.  They have a good working relationship but he often gets exhausted keeping up with her eccentricities as a physician.

On the other hand, Rianne would have no one else care for her patients.

Sally is a high-strung, easily excitable, but highly paranoid Obstetrician and Gynecologist.  She flat out loves everything and everyone and is not afraid to be very vocal about how wonderful she feels.

In return, everyone loves Sally's positivity... and hates her for it as well.  Her squeals of joy are often bellowed at inappropriate times.