Komikon Annnounces the INDIEKET: My Thoughts 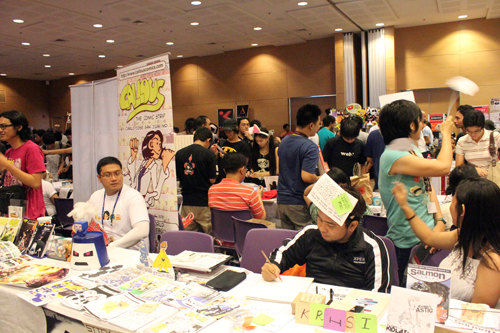 Just this week, the good folks that bring us Komikon announced a new event that's, surprisingly, coming up really really fast!  That event is the First Komikon Grand Independent Komiks Market, or "Indieket", for short.  It'll be on July 14, 2012 in Hall A of the Bayanihan Center, Unilab Center, in Pasig City from 10am – 7pm.  For more information about the event, check out the announcement at the Komikon website!
Much has been said regarding the role of the independent comic scene in the current revival of "komiks" (as locally owned and/or produced comics are known as).  Some have gone as far as saying that it is the heart and soul of the current Philippine comic book industry.  Indications of its perceived importance can be seen during any major comic convention in the country where independent artists are given prime convention floor space, often for free.
In such conventions, indie komik producers run an online race to stake a claim for these very limited free tabletop spots.  This leaves those who aren't proverbially glued to computer screens to often miss out on getting a spot in these shared tables.
Perhaps recognizing this drawback in their exhibitor selection process and limitation of tablespace for the increasingly populous indie komiks community during their main comic events, Komikon brings us an all-independent convention!  They do add, however, that all those who wish to have a spot in the Indie area of the upcoming Komikon in October have to participate in this event as the exhibitors who can avail of these tables will be determined from the Indieket.
It was announced that the free tables for October will go to: the top ten highest-earning exhibitors of the Indieket, the top ten ticket sellers (I'm still confused as to how this will play out), and the remaining fifteen spots will be raffled off.
As for the Indieket itself, there doesn't seem to be another online race to get free spots for it. Perhaps it is a valid assumption that there will be enough space for all who wish to participate.
What do I think?  The INDIEKET is a brilliant idea!
First and foremost, this brings independent titles to the forefront!  For this event, the indies are the stars of the show!
Secondly, the selection process for independent area tablespaces is a warranted experimentation and, in my opinion, an improvement.  It rewards those who have gained a following and perhaps even newbies who have a keen sense of effective marketing.  And even without the above, there are fifteen spots given by pure chance.  I'm very interested to see how it'll all pan out.
Third, this may bring the local komiks community to a new frontier.  I believe this is a daring experiment and I'm incredibly excited about it!  I may be speaking beyond the scope of the event, but within the Indieket, a convention filled with ideally unrestricted creativity, we may witness a whole new maturing of the community in ways that may not have been possible with the former methods of support for the local independent scene.  It'll be a fascinating event!
Yes, I've applied to be a part of it.  I do hope I get a spot in the Indieket.  Nevertheless, if not, I'll still be there!  This is too epic to miss. :)