Last Saturday, July 16, 2011, Baguio City held its first ever Comic Convention (at least to my knowledge) and Callous Comics and I were more than happy to participate!
The whole event was spearheaded by Gerald "Majic" Asbucan, a local Cordilleran artist who recently made waves in the Filipino independent comic scene with his work on Big Fat Ben.  He has hopes of reinvigorating the interest in comic books in pretty much the whole mountain province and several artists, myself included, stepped up to help his cause.
And so, the epic journey of many comic artists and writers, many of which were based in the nation's capital region (again, myself included) to join this historic event began!
Baguio, a highly-urbanized city, is nestled high in the Cordillera Central mountain range in the northern part of the Philippines' largest island, Luzon.  At approximately 1,500 meters above sea-level, it is known for its cool climate and lush evergreen trees.  Thus the nicknames, the "City of Pines" and the "Summer Capital of the Philippines".  Its surreal atmosphere is in such stark contrast from much of the rest of the country which made it a favorite destination for many Filipinos and tourists.  To put things into perspective, it is a four to eight hour trek by land from the nation's capital, Manila, but those who embark on the journey don't mind.  Most believe Baguio City is worth the ordeal. 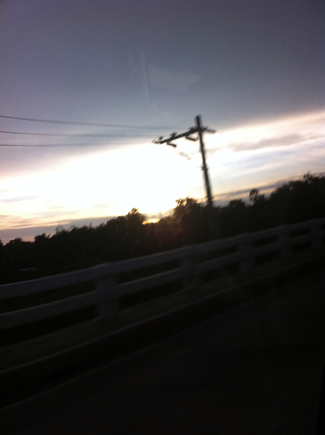 Somewhere along MacArthur Highway en route to Baguio City
My expedition to the mountaintop city began the afternoon before the comic con.  It was an unusual time for me to begin a trip to Baguio, as I traditionally leave in the early morning.  It was an unusual time of the year as well.  I was thus treated with rural landscapes so different from what I was accustomed to seeing along the way.  The sun shed quite a different light too, flooding the scenery with gorgeous contrasts as it began to set.  Consequently, I could see very little of the mountains as we began the climb up the snaking roads to the city, as night had already fallen. 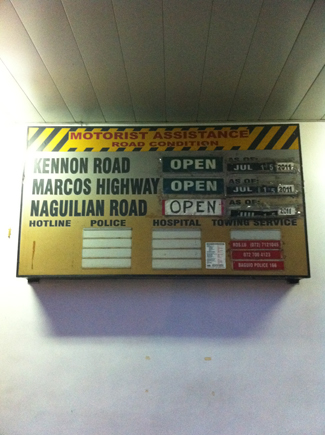 At a rest stop.  Yup, all roads to Baguio City Comic Con are okay!
The morning of the comic con I was up quite early.  Ingress began at 6:30 AM, I was told.  So I got dropped off at the entrance of Baguio City National High School, where the convention was being held, and made my way to the gymnasium.
By now, after several comic cons, I had streamlined the transport of my wares.  I have a rolling bag with everything I need in it and my banner and stand inside a bag I could sling over my shoulder.  But still, with the not-exactly-smooth pavement of the high school, the distance of the gymnasium from the gate, the oxygen-deprived high altitude, the stairs, and plain old being out-of-shape, I was catching my breath by the time I got to the venue.
All that went away pretty quickly as soon as I saw the event marshals in a little pow wow seemingly planning out how to efficiently go about the day.  But as I inched closer it dawned on me just what it meant to be a part of a "first-ever" anything.  The organizers were in an admirably very controlled state of panic as pretty much everything they needed for the convention had yet to arrive.  Tables, sound equipment, food... everything. 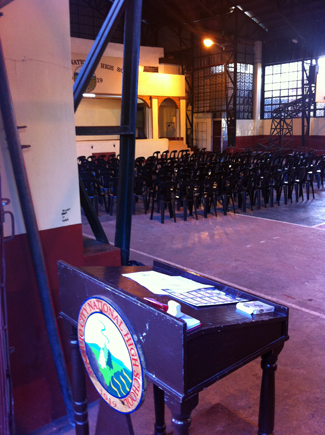 The entrance to the event's venue... a high school gymnasium! 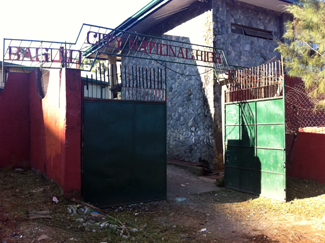 There was a school entrance closer to the gym than the one I entered.  Phooey.  At least I got a nice walk.  Yeah.

So Gerald kept telling his faithful troops what to do when the convention paraphernalia they needed would arrive.  About an hour or so later they did, all at the same time, and the mayhem began.
It's an endearing (and often annoying) inside-joke among Filipinos regarding lateness.  Hey, it happens.  Thank goodness we're used to picking things up after the fact.  Because what I initially saw as mayhem turned out to be a swift and efficient construction of a comic convention.  Granted, it was a small one, but in no time at all we had a convention venue set up, be it ever so humble. 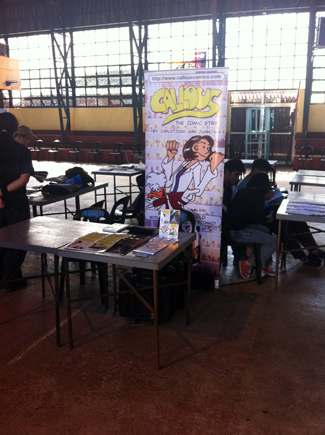 My table at the independent comics area.  I had once again forgot to bring my tablefront banner.  Oh well.

The convention began and a few people trickled in the entrance.  Since my table was pretty much the first thing an attendee would see I was often treated as the person-to-ask-questions-to.  Questions like, "so, what is this 'comic con' thing all about?!"  I happily answered such questions anyway.  A lot of parents brought their kids too and a lot of them purchased my button pins.  Good times! 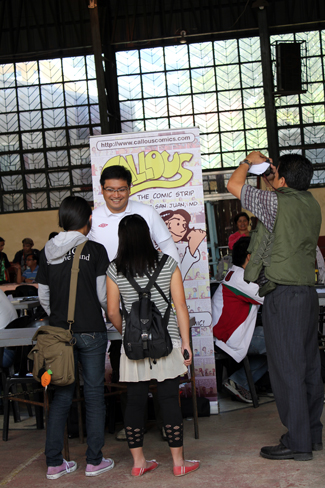 Doing my thing!
However, I was beginning to get worried that morning.  There were hardly any attendees present since the doors opened.  In a way it was nice because I got to leave my table and talk to my friends in the indie comics area.  We joked around and laughed.  Some of us talked about collaborations and whatnot.  I was later told by Gerald and other local artists that the morning lull was actually a cultural thing.  Mornings in Baguio City were apparently relatively slow compared to Manila, especially on the weekends.  I was assured things would pick up in the afternoon.  I took their word for it.
And they were right.  More people came in around noon time and then things started to feel more like the usual comic con.  Cosplayers arrived too and in decent numbers!
It was a striking characteristic about this convention that most of the things available for purchase were independent comic titles.  Whether this was intentional or by some twist-of-fate, it was wonderful to see such focus of attendees on the indie comic scene.  There was one group from Baguio City too and it seemed like they were having a blast! 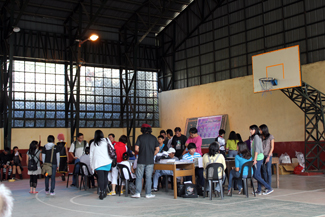 Artist Alley
I was incredibly surprised at how many people from Baguio were avid webcomic readers and some even knew about Callous Comics!  My books did well, particularly Chocolate Chip Wishes and Caffeine Dreams and The Land of the Guardians.  There was once again a lot of interest on the Webcomics: What's Cooking? charity comic book/cookbook. 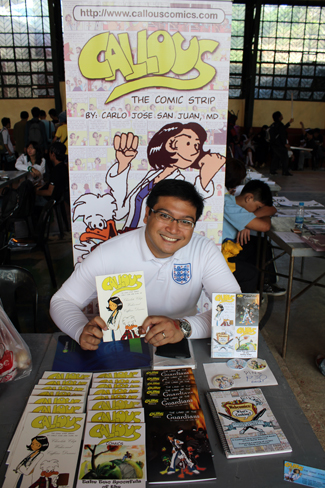 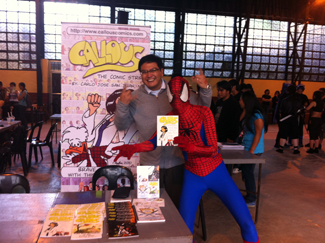 Thhwwwiiiip! The dancing Spider-Man swings up to Baguio City!

Rikimaru and Ayami from Tenchu.  I loved the game, they loved the premise of Callous Comics.  Ayami's even considering cosplaying as Rianne from The Land of the Guardians in the future.  OMG, Please do!

X-23 from X-Men: Evolutions is one of my favorite Marvel characters.  Apart from choosing to portray an awesome, little-known character, this cosplayer actually bought this copy of The Land of the Guardians!  So that makes her double-awesome!

Even though attendance was nowhere near that of, say, Komikon or Metro Comic Con, and the fair share of freshman hiccups from the event itself were present, by the end of the day we were all pretty satisfied.  The people who did show up were avid comic fans and I even had a lengthy discussion with one con-goer about various cartoon and comic ducks which was quite entertaining.  One wonderful comic fan even purchased all my books, including Webcomics: What's Cooking?!
I felt that people were just happy that there even was a comic con in Baguio City and just wanted to soak it all in.  It was definitely a different atmosphere in this convention, as different as the city itself.  I'm sure the event will grow over time but for a small start for a small comic con, it got off on the right foot. 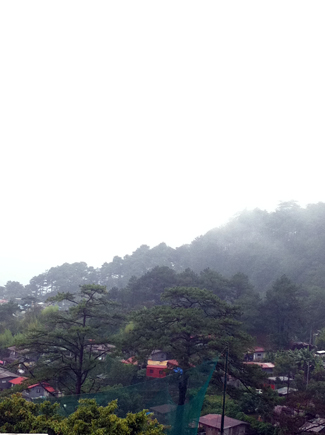 The following morning, one last look at the city before heading back down to Manila.  Thanks Baguio City!