Posted by Carlo Jose San Juan, MD on Wednesday, June 29, 2011 Under: Comics and Webcomics
Recently I ended up flying to the US for a pretty much unplanned vacation.  I took the opportunity to purchase some print versions of webcomics (since shipping rates wouldn't be as prohibitive) and perhaps actually meet some of the creators I've grown to regard as friends.
My first stop was LA, California and I placed a few orders online for books, all through Amazon.com.  I took advantage of their free shipping as we purchased quite a few more items. 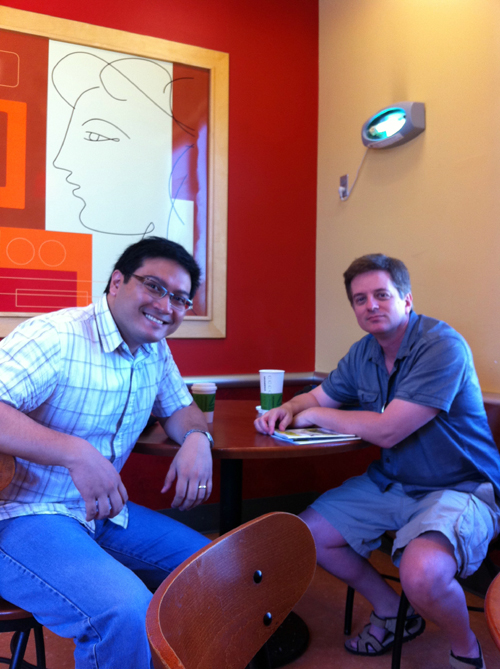 T. Andrew Dempsey (right) and myself at a Starbucks in North Bergen, New Jersey
Then I was off to New Jersey.  There, I had a wonderful chat with Timothy Dempsey over coffee.  Tim was one of my first webcomic buddies since I started Callous' online renaissance in 2009.  We talked about each others' comics and life in general.  I was pleased to know he had visited the Philippines before.  I asked for a sketch on the back of his business card, which he gladly did.  Tim does the wonderfully insightful comic, My Life in the Trenches.  Please do check it out and see why I like it so much.

Then I was off to Orlando, Florida where I pretty much was a full-on tourist taking on the theme parks and whatnot.  My personal favorite, no surprise, was Universal Studios' Islands of Adventure, particularly the comic strip-themed area.  I could stand in front of Hagar the Horrible's viking ship and listen to their jolly singing all day.  I regret not getting the "Dagwood" sandwich at Blondie's, but there was far too much to do there with so little time.  I felt I was the only one who recognized Broom Hilda and Pogo at the park that day.

I also had arguably the best steak in my life at Charley's.  After that I just couldn't eat another steak.  Nothing could top it.  It was that good.  Bravo. 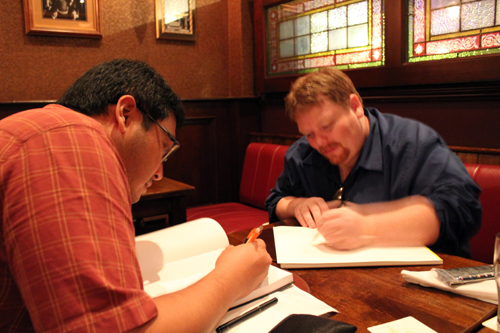 Thorne (right) and I doing a sketch exchange.
But that's not all.  I met up with Thorne who does the fantasy comic, Tears and Pain, whom I've had the pleasure of being the artist of the series for a short, two-strip spell.  We met up in Downtown Disney at an Irish pub, had our fill of Guiness and lamb, and did a quick sketch exchange.  We had a wonderful chat and he gave me a brilliant-looking refrigerator magnet of Kiera, one of his characters. 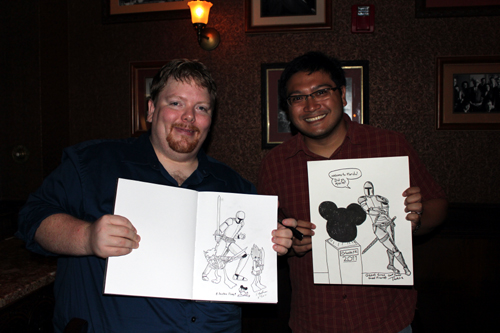 Thorne (left) and I with our received sketches!

Upon returning to Los Angeles, California, it was like Christmas as a bunch of packages awaited me!  First, a box from Amazon.com.  It had both books of Dawn Griffin's Zorphbert and Fred, which I probably don't express enough to her how much I enjoy it.  I also ordered one of the few remaining copies of Caanan Grall's Celadore.  Celadore actually has a big place in my heart as it was the first webcomic I read through from start to its latest page (at the time).  I followed it to its end after that.  Unfortunately, its host, Zuda, had shut down and Celadore disappeared from the internet with it.  I'm also a fan of his comic, Max Overacts, which earned him an Eisner nomination.  He and I are co-contributors for Webcomics: What's Cooking?. 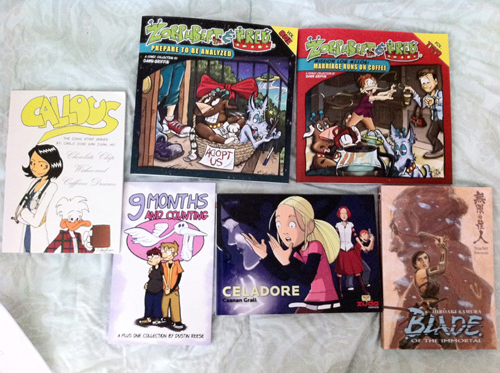 My comic stash from my 2011 USA visit!  I also included my own comic for size-comparison (it's A5).

I also bought the latest Blade of the Immortal trade paperback.  I ran into the series by accident a long time ago and it remains to be the only comic book I still "collect". 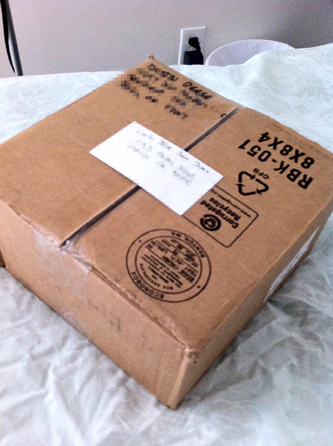 Ooo... mysterious box!  My package from Dustin Reese!
I also got a nice surprise from Dustin Reese who does Plus One.  If there was ever a comic that had the closest connection to Callous, it would be Dustin's Plus One.  It contained a copy of Plus One: 9 Months and Counting and it looks fantastic!  It also had a nice note from Dustin and a batch of homemade chocolate chip cookies!  How about that?! 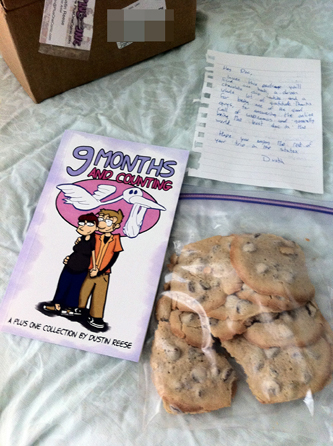 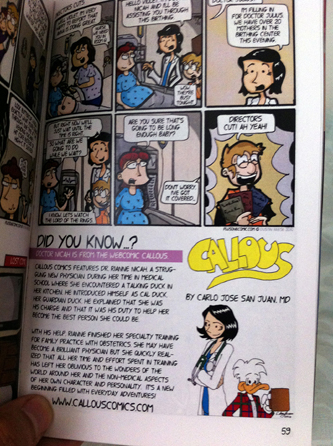 I was also incredibly touched to find a nice section dedicated solely to Callous in his book, as Dr. Rianne Nicah does play a significant part in the story.  Thank you so much, Dustin!

But there's more!  I also got this padded envelope from Jande Rowe who does Aedre's Firefly! 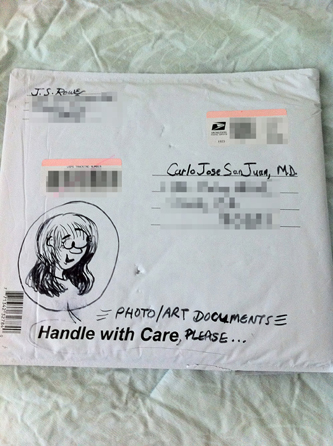 It contained a stunning piece of artwork featuring Nerbert the frog from her comic.  I had suggested, unwittingly, the name Froggurt for her frog but lost out to Bo Lumpkin who gave the name Nerbert.  Still, she thanked me for the suggestion with this marvelous artwork. 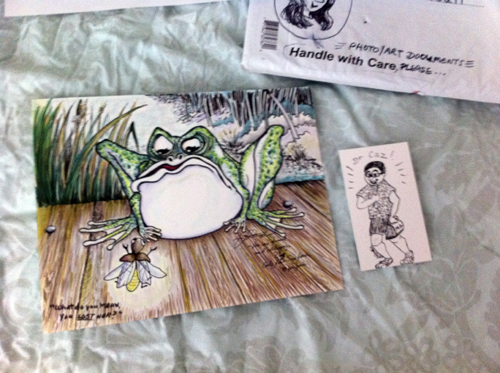 And a drawing of me too!

I was also able to talk to George Ford on the phone, who does the comic Addanac City!  I had hoped to meet him in person too but we just couldn't get to find a good time to do so.  Still, it was great to talk to him! :)

And that's it for comics from my whirlwind trip!  With friends like these, it was a pleasure indeed!

In : Comics and Webcomics