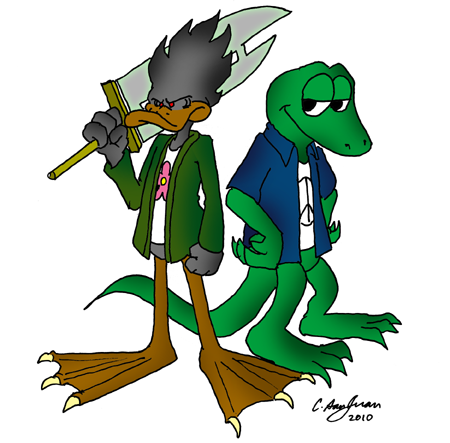 I was faced with the task of redesigning Muscovy Duck after the events of The Land of the Guardians.  Will I bring his old spikey hair back or keep his DBZ-style 'do?  In the end, I supposed it would have been more feasible to have his last-seen features intact, including the clawed feet.  I did, however, give him his flowered Guardian Duck T-shirt back.  He's still in his green robe, only it is open and sans belt.  I'm currently writing his return in a new storyline which includes bringing back Coco Komodo.

So what's this new tale about?  This may change as the story develops but right now... let's just say there's another crisis, this time in Chancebrough.  Rianne's in trouble in the human world and Cal Duck is compelled to intervene, being her Guardian.  The other Guardians help, of course, but realize that in this particular case they're gonna need more muscle.  Thus, Kalus brings in Muscovy and Coco.  Questions of Muscovy's reformation are there which adds to the drama.  Fun!  Watch out for the new epic storyline in 2011!

In other Callous news, 2011 will tentatively see the release of three books.  First, the re-printing of Chocolate Chip Wishes and Caffeine Dreams with additional content, including the yet to be printed Sunday comic strips.  Second, the compilation of The Land of the Guardians which will be extended, particularly the ending, with bonus content as well.  The third book is still "iffy", which is another compilation of comic strips.  I might make a black and white mini-comic for comic cons as well.  Whew!