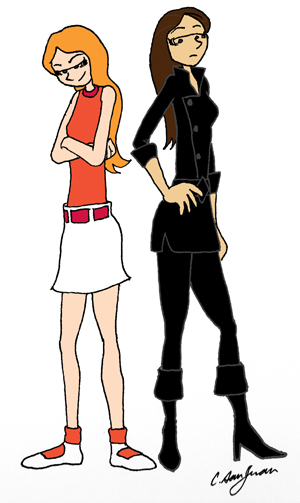 When I first encountered the show Phineas and Ferb on the Disney Channel a few years ago, I dismissed it as another abrasive, cheap, and annoying animated series with nothing but juvenile jokes.  Then in the past year, since my son became old enough to appreciate the show, I became more exposed to it and was often "forced" to sit through it.  Much to my delight, it was far more appealing than I originally assumed it to be!  Nowadays I look forward to the series and am sometimes saddened when my son would rather watch something else.
My favorite characters in the show turned out not to be the titular characters but the two I illustrated above, Candace Flynn and Vanessa Doofenshmirtz.  They are approximately 15 and 16 years old, respectively, and are delightfully going through the motions of experiencing life and all its eccentricities for the first time in their lives.  They are marvelously deep characters and undergo perhaps the most development as the series progresses, at least to my eyes.
Candace in particular is discovering herself and the world around her as she continually tries to expose Phineas and Ferb and their astounding adventures to their mother, who always seems to miss out on what's happening one way or another.  These personal discoveries, while often incidental and secondary to her main objective, are what draw me to her character.
Vanessa, on the other hand, plays the tough teen who would normally dismiss acts of affection and endearment from her father, whom she knows is an "evil scientist".  However, as the series progressed, she would open up to it and would sometimes try to win her father's pride by helping him in his often benign acts of "evil".  She also undergoes moments of self-realization and discovery which I definitely find appealing.
While the show is unmistakably kiddie fare, the depth in character of these two young ladies and other wonderful undercurrents make it appreciable to even an adult like me.  You just gotta look past the saccharin.